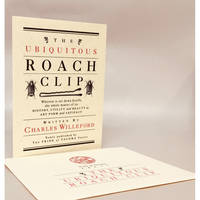 Description:
[Santa Barbara, CA?]: Pride of Tacoma Press, 2003. First Edition. Fine. A single sheet folded to make four page. This is a short essay Charles Willeford wrote in 1973 marveling at the rapid evolution of the roach clip (a device for holding a marijuana cigarette when it becomes too small for one's fingers) from a folded match to an ornate piece of jewelry in less than 10 years. It is not clear to your cataloguer if this piece was previously published and if not, what the origin of the text is. Published in an edition of 150 copies signed by the publisher, Michael Kellner, with a matching envelope. First separate edition or first edition. A fine copy.
Item Price:
£30.41
£4.22 shipping to USA

Description:
Santa Barbara: Pride of Tacoma Press, 2003. First Edition. A finely printed and wonderfully designed pamphlet limited to 150 numbered copies (the entire edition) signed by its graphic designer Michael Kellner. The first printing anywhere of Charles Willeford’s essay on the roach clip which is the device used for smoking marijuana. As new in the matching specially printed envelope. “...There is a common, jointly-held belief (whether it is true or not is immaterial) that the shorter the hand-rolled stick becomes the better it gets. The shorter the cigarette, you see, the more packed the residue - in tars, resins, ashes, bits of seeds, and essence cannabis. Therefore the last and final drag, all residue darkly presents us surely the greatest toke of the entire cigarette. Besides Mary Jane is an expensive broad, and it is certainly Un-American not to get one’s money’s worth....”
Item Price:
£63.35
£5.07 shipping to USA