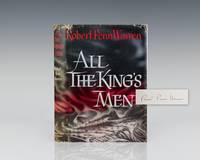 Description:
New York: Harcourt, Brace and Company, 1946. Set in the 1930s, "All The King's Men" traces the rise and fall of Willie Stark, who resembles the real-life Huey "Kingfish" Long of Louisiana. Stark begins his political career as an idealistic man of the people but soon becomes corrupted by success. Generally considered the finest novel ever written on American politics. Basis for the 1949 film starring Broderick Crawford and the 2006 remake with Sean Penn, Jude Law and Kate Winslet. Named by Modern Library as one the 100 greatest novels of the twentieth century.
Item Price:
£9,033.20
FREE shipping to USA

Description:
First Edition Library, 1939-01-01. Hardcover. New. SHIPS THE NEXT BUSINESS DAY COMES IN THE SLIPCASE . EACH OF OUR BOOKS IS THOROUGHLY INSPECTED AND ACCURATELY DESCRIBED. IN ADDITION OUR LIKE NEW CONDITION BOOKS ARE ALWAYS VERY VERY CLOSE TO NEW.
Item Price:
£13.25
£3.28 shipping to USA