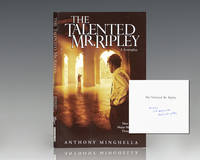 Description:
New York: Hyperion, 1999. First Edition. Paperbound. Signed and inscribed by the author / screenwriter, Anthony Minghella: “For John, with best wishes, Anthony Minghella.” Includes the complete screenplay for the film The Talented Mr. Ripley, written and directed by Anthony Minghella, starring Matt Damon, Gwyneth Paltrow, Jude Law, and Cate Blanchett. With an introduction by Anthony Minghella. As new in printed wrappers. The darkly suspenseful story of a young man’s desperate longing to escape the bitter mediocrity of his life, transforming it by any means necessary into conforming to what he perceives as the glamourous life of a privileged and handsome playboy. The film received many Oscar nominations, including Best Writing, Screenplay Based on Material Previously Produced or Published (Anthony Minghella), Best Actor in a Supporting Role (Jude Law), Best Art Direction-Set De
Item Price:
£162.38
£4.87 shipping to USA