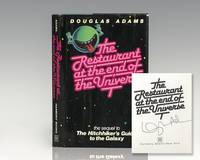 Description:
New York: Harmony Books, 1980. First American edition of Adams' sequel to the The Hitchhiker's Guide to the Galaxy. Octavo, original half cloth. Signed by Douglas Adams on the title page. Fine in a near fine dust jacket. Jacket design by Ken Sansone. Jacket illustration by Peter Cross. The Restaurant at the End of the Universe is the second volume in the "The Hitchhiker’s Guide to the Galaxy" series. "What’s such fun is how amusing the galaxy looks through Adams’s sardonically silly eyes" (Detroit Free Press).
Item Price:
£1,028.13
FREE shipping to USA 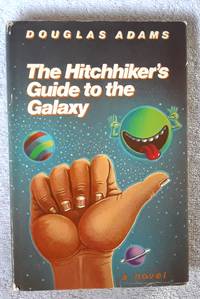 Description:
FREE SHIPPING IN THE US. New York: Harmony Books, 1979. First American Edition of this modern novel. Dust jacket in good condition, book in fine condition. Jacket painting by Peter Cross. Originally a radio series, broadcast in 1978 on BBC Radio 4, Adams developed the Hitchhiker's Guide into a "trilogy" of five books which sold more than fifteen million copies during his lifetime. A television series, comic books, computer games, film, and live theatre followed. The story of hyper-intelligent beings who build a computer named Deep Thought to calculate the "Answer to the Ultimate Question of Life, the Universe, and Everything." It is the basis for the 2005 film directed by Garth Jennings, starring Martin Freeman, Sam Rockwell, Mos Def, Zooey Deschanel and the voices of Stephen Fry and Alan Rickman. THANK YOU.
Item Price:
£699.13
FREE shipping to USA