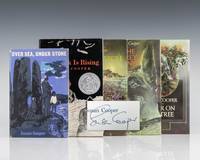 Description:
London: Jonathan Cape, 1965-1977. First British editions and true firsts of each book in the Dark is Rising Sequence. Octavo, 5 volumes. Each copy is signed or inscribed by the author. Each are in excellent condition in the original dust jackets. Housed in a custom half morocco clamshell box. One of the most celebrated fantasy sequences of all time, The Dark Is Rising is a searing, epic rendering of the eternal conflict between good and evil. It was inaugurated in 1965 with the U.K. publication of Over Sea, Under Stone by Jonathan Cape. The sequels were published 1973 to 1977, volume four, The Grey King (1975), won both the Newbery Medal, recognizing the year's "most distinguished contribution to American literature for children", and the inaugural Welsh Tir na n-Og Award for English-language books with Welsh background. The concluding Silver on the Tree (1977) also won the annual Tir na n-Og Award.
Item Price:
£7,950.55
FREE shipping to USA 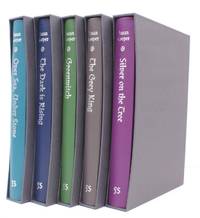 Description:
Folio Society,, 2011-2012. 5 vols., 8vo., First Edition thus, with coloured frontispieces, 35 fine coloured plates and grey endpapers; pictorial boards, buckram backs lettered in silver, a fine set in publisher's board slip-cases. FIRST VOLUME SIGNED BY THE AUTHOR. One of the best-loved and most highly regarded children's sequences of the late twentieth century, Susan Cooper's pentalogy was first published between 1965 and 1977. Here each volume benefits from a new preface by the author. COMPLETE SETS ARE EXTREMELY SCARCE; SIGNED COPIES THE MORE SO.
Item Price:
£2,260.00
£9.80 shipping to USA