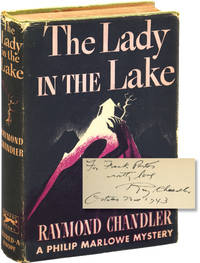 Description:
New York: Alfred A. Knopf, 1943. First Edition. First Edition. INSCRIBED to Frank Partos on the half title page: "For Frank Partos / with love / Raymond Chandler." Partos and Chandler co-wrote the screenplay for "And Now Tomorrow" (1944), one of Chandler's few screenwriting efforts. As a screenwriter, Partos was responsible for some of the best genre films of the 1940s. His work includes "Stranger on the Third Floor" (1940), "The Uninivited" (1944), and "The Snake Pit" (1948), each groundbreaking in the areas of film noir, ghost stories, and insane asylums, respectively. The author's fourth book, and the fourth Philip Marlowe mystery. Basis for the 1947 film, directed by and starring Robert Montgomery. Near Fine in a Very Good dust jacket with moderate wear at the extremities.
Item Price:
£30,446.25
FREE shipping to USA