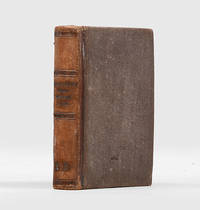 Warsaw: Przeglad Tygodniowy,, 1873. Duodecimo (137 x 100 mm), pp. 132. Bound with 3 other works in contemporary roan-backed pebbled cloth, spine ruled and lettered in black. Ownership initials M.D. stamped at foot of spine. Last 2 leaves bound in twice; a very good copy. First edition in Polish of Mill's Utilitarianism (first, 1863), his important "definition of Utilitarianism, and a defence of the philosophy expressed by it" (MacMinn, et al.) The translator was the positivist philosopher, publicist, and jurist Feliks Bogacki (1847-1916). As stated on the title page, this Polish edition was authorized by Mill. Mill had been following closely the events in Poland of the 1860s, as his "Letter on Poland", published in the Penny Newsman for March 15 1863, demonstrates. It is "a discussion of the insurrectionary movement in Poland which, Mill maintains, is designed to return the lands to the peasants; [it] is popular in origin; and is, because it is a revolution, indicative of the commencement of a new era in the downtrodden countries of Europe" (MacMinn, Hainds & McCrimmon, p. 94). "Western liberalsparticularly English liberalswere extolled by many in Warsaw in the late 1860s and 1870s, but when their work was translated, it was repositioned within a specifically Polish debate  Adam Wislicki, the editor and publisher of the positivist's organ, The Weekly Review, (Przeglad tygodniowy), hoped to shift attention away from 'high politics' (the 'abstract' problems of international diplomacy or the conflicts of ruling elites) and towards 'little politics' (the newest methods of raising sheep, spreading literacy, financing higher education, and building railroads)'" (Brian A. Porter, "The Social Nation and its Futures: English Liberalism and Polish Nationalism in Late Nineteenth-Century Warsaw", The American Historical Review, vol. 101, No. 5, December, 1995, pp. 1470-7).

spine
The outer portion of a book which covers the actual binding. The spine usually faces outward when a book is placed on a shelf....[more]
New
A new book is a book previously not circulated to a buyer. Although a new book is typically free of any faults or defects,...[more]
First Edition
In book collecting, the first edition is the earliest published form of a book. A book may have more than one first edition in...[more]
leaves
Very generally, "leaves" refers to the pages of a book, as in the common phrase, "loose-leaf pages." A leaf is a single sheet...[more]
title page
A page at the front of a book which may contain the title of the book, any subtitles, the authors, contributors, editors, the...[more]
pebbled
Pebbled cloth or leather describes the covering of a hardcover ...[more]
Cloth
"Cloth-bound" generally refers to a hardcover book with cloth covering the outside of the book covers. The cloth is stretched...[more]