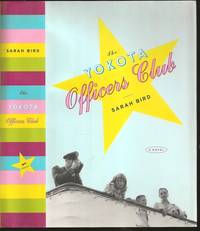 367 pages. Octavo (8 3/4" x 5 1/2") bound in original publisher's quarter red paper with silver lettering to sine over blue boards in original pictorial jacket. First edition. 1. Smells play a major role in The Yokota Officers Club . They are even used as titles for each chapter. What effect did they have on you as a reader? 2. The central image/metaphor of the book is the perfume factory. At the end of the book, Bernie says: 'That honeysuckle is but one link in an endless limbic chain that contains all the smells of my family and of our life together.' Then she goes on to name all the smells in the book, concluding that 'each smell is a blossom that combines with all the other smells the same way real flowers would in a real perfume factory where the days of sunshine and growing, the days of storm and drought, the times of plenty, times of want, what the flowers got, what they didn't get, they're all squeezed together under preposterous pressure or boiled or tinctured or distilled into a few drops of a smell so beautiful it can make you remember everything.' Do you agree with this metaphor of how family unity/memories are created? 3. Understanding what you do about Moe, Macon, Fumiko, and Bernie, is there anything any of them could have done to change their fate? 4. Are the pressures a military life puts on soldiers--particularly the kind of military life Macon Root had, involving highly classified, highly dangerous missions--compatible with being a warm and loving spouse? Parent? 5. Have you known any military families? How much did you know about their lives? Did the novel give you a greater appreciation of those lives? 6. It seems that military brats enjoyed their peripatetic childhoods in direct relation to how extroverted they were. The more outgoing they naturally were, the more they thrived on the constant moving. How do you think you would have fared as a military child? As a military wife? 7. Have you ever had an experience similar to the one Bernie had when you return to the scene of a childhood memory and find it strangely shrunken or diminished in some way? How is this idea of a diminution, of a degradation, of, in some cases, a fall from grace, carried out in other ways in the book? In Bernie's experience of Okinawa as contrasted with her memories of Japan? In Mace's career? In the military in general from World War II to the Vietnam War? In Moe's experience both with the military and with her marriage? 8. Did you ever reveal a secret as a child? What were the consequences? Can Bernie or any child of that age be held responsible for unkept secrets? 9. Moe and Mace seem to have come to a stalemate in their marriage. Who is responsible? What do you predict will happen to them? What do you think should happen? 10. Contrast the two mothers in the book, Moe and Fumiko's mother. How does each one react to the stresses placed upon her and her family by their respective countries? 11. One of the themes of the novel is silence, the silence of men flying reconnaissance missions, but more especially the silence of the women around them. How does each of these characters find her voice: Bernie? Moe? Fumiko? 12. This novel straddles the line between fiction and memoir. Does it take the best from each approach or the worst? What do you like and dislike about the two different approaches? 13. Did you believe that Mace and Fumiko had had an affair? Were you relieved that they hadn't? 14. Since Bernie could not have ever seen her father acting as Wingo's co-pilot, how is the crucial relationship they had in flight demonstrated? 15. Humor and tragedy collide throughout the novel. Do you prefer fiction that blends these parts of life or keeps. Condition: Near fine in like jacket.

Sarah Bird is the author of four previous novels: Virgin of the Rodeo, The Boyfriend School, Alamo House, and The Mommy Club. She lives in Austin, Texas, with her husband, George, and son, Gabriel. From the Hardcover edition.

Seller rating:
This seller has earned a 5 of 5 Stars rating from Biblio customers.
Biblio.co.uk member since: 2005
Fort Worth, Texas
Ask Seller a Question

jacket
Sometimes used as another term for dust jacket, a protective and often decorative wrapper, usually made of paper which wraps...[more]
First Edition
In book collecting, the first edition is the earliest published form of a book. A book may have more than one first edition in...[more]
octavo
Another of the terms referring to page or book size, octavo refers to a standard printer's sheet folded four times, producing...[more]
fine
A book in fine condition exhibits no flaws. A fine condition book closely approaches As New condition, but may lack the...[more]