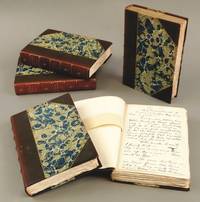 Hartford: American Publishing Co., 1907. Twenty-five volumes. Octavo. Publisher's three quarter olive brown morocco and marbled boards, raised bands, lettered in gilt, t.e.g., others untrimmed. Portraits and plates. A number of the spines are characteristically sun-faded to lighter brown, occasional rubbing to raised bands and toes of a few spines, but a very good or better set, with none of the deterioration to the joints so common to this binding. The esteemed "Autograph Edition," limited to 512 numbered sets, signed by Clemens in the first volume: "S.L. Clemens / (Mark Twain)." Eighteen of the plates are signed by their respective artist, including Peter Newell, A.B. Frost, Charles N. Flagg, E.W. Kemble, Karl Gerhardt, Dan Beard, et al. Charles Dudley Warner signed the limitation page to volume 10 (THE GILDED AGE), and Brander Matthews signed at the end of his critical essay in volume one, as usual. This edition was published as a subscription set in a hierarchy of bindings, and sets were occasionally customized for the purchaser by the inclusion of related manuscript leaves, letters and other inserts. Such is the case with this set, and it is accompanied by a two page a.l.s. from Walter Bliss, 23 December 1905, to the original owner, detailing the arrangements made for Christmas Day delivery, and pointing out the location of the extra material (volumes I, V, VI, IX and X), and mentioning some extra loose plates, which are no longer present. In volume one are inserted a) a one page a.l.s. from Clemens, Riverdale on Hudson, 5 March 1902, to "Dear Bliss," written prior to departure for travels and trying to settle some publishing matters pertaining to a deal with Colliers and cancellation of another option, signed "S.L. Clemens," ca. fifty words; and b) a leaf from the autograph manuscript of THE GILDED AGE, in Clemens' hand, numbered '22' at the top margin, and beginning "...here, on the railroad & the steamboat, & say 'this' one little spot shall not be touched - this hovel shall be sacred ...," ca. 125 words. Volume V contains an extra limitation leaf from the "Author's Signed Edition" of FOLLOWING THE EQUATOR, unnumbered, but signed both as Twain and as Clemens. Volume VI includes the facsimile printing of the letter by Clemens commenting on the frontis photogravure (the image of Clemens transposed into a horse and steer drawn cart) for that special edition. Volume XI includes a) another leaf from the manuscript of THE GILDED AGE in Clemens's hand, with corrections and revisions, ca 125 words, numbered '60' in the top margin, and beginning: "'But how should I know whether they were boys or girls?'," and b) a leaf from the manuscript in Warner's hand, numbered '820' in the upper margin, beginning: "'Daft is a little strong ..., " ca 150 words. Volume XI contains a third leaf in Clemens's hand from the manuscript of THE GILDED AGE, numbered '421' then altered to '1000' in the upper margin, heavily revised, with significant deletions and insertions, ca. 150 words. While sets with a single Clemens leaf (often coupled with a Warner leaf) from the manuscript of THE GILDED AGE are not uncommon, sets with multiple Clemens leaves are uncommon, and those with multiple leaves plus a letter are even more exceptional. Three of the late volumes coincided with the publication of their respective public trade editions. BAL 3456.

morocco
Morocco is a style of leather book binding that is usually made with goatskin, as it is durable and easy to dye. (see also...[more]
gilt
The decorative application of gold or gold coloring to a portion of a book on the spine, edges of the text block, or an inlay in...[more]
leaves
Very generally, "leaves" refers to the pages of a book, as in the common phrase, "loose-leaf pages." A leaf is a single sheet...[more]
Marbled boards
...[more]
rubbing
Abrasion or wear to the surface. Usually used in reference to a book's boards or dust-jacket.
BAL
Bibliography of American Literature (commonly abbreviated as BAL in descriptions) is the quintessential reference work for any...[more]
octavo
Another of the terms referring to page or book size, octavo refers to a standard printer's sheet folded four times, producing...[more]
raised band(s)
Raised bands refer to the ridges that protrude slightly from the spine on leather bound books.  The bands are created...[more]
facsimile
An exact copy of an original work. In books, it refers to a copy or reproduction, as accurate as possible, of an original...[more]