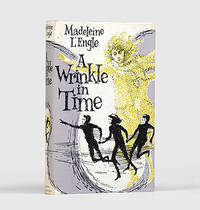 A Wrinkle in Time.

A Wrinkle in Time.

London: Constable Young Books Ltd.,, 1963. A very good copy Octavo. Original red and black patterned boards, titles to spine in gilt. With the pictorial dust jacket. Dust jacket design by Antony Maitland. Bookseller's ticket of Hall's Book Store in Melbourne and Prahran to front pastedown; neat ownership inscription of R. J. Lane to front free endpaper, dated 1964. Spine ends gently bumped, some abrasion and glue residue to pastedowns, faint partial toning to free endpapers. A very good copy indeed, in the near-fine dust jacket, price-clipped, a trifle creased at extremities, minor soiling. First UK edition, first impression, of the first instalment in the Time Quintet. A Wrinkle In Time is an important and classic children's fantasy work by Madeline L'Engle (1918-2007), originally aimed at young female readers but with major crossover appeal. Upon publication, it won numerous awards, including the 1963 Newbery Medal, the Sequoyah Book Award, and the Lewis Carroll Shelf Award, as well as being a runner-up for the Hans Christian Andersen Award. Having sold more than ten million copies worldwide, L'Engle's novel has also seen several adaptations, including a film, a play, an opera, and a graphic novel. A Wrinkle in Time is particularly notable as a sci-fi novel with a female author and a female protagonist.

A Wrinkle in Time is a science fantasy novel by Madeleine L'Engle, first published in 1962. The book won a Newbery Medal, Sequoyah Book Award, and Lewis Carroll Shelf Award, and was runner-up for the Hans Christian Andersen Award. It is the first in L'Engle's series of books about the Murry and O'Keefe families.

Great read for a kid, adult, or anyone who hasn't lost their sense of mystery and adventure. What if? What if time travel were as easy as L'Engle proposes? I still look for Mrs. Whatsit to point me in the right direction.

This book got me hooked on reading as a child. What bettter praise can you give a book?

jacket
Sometimes used as another term for dust jacket, a protective and often decorative wrapper, usually made of paper which wraps...[more]
spine
The outer portion of a book which covers the actual binding. The spine usually faces outward when a book is placed on a shelf....[more]
octavo
Another of the terms referring to page or book size, octavo refers to a standard printer's sheet folded four times, producing...[more]
gilt
The decorative application of gold or gold coloring to a portion of a book on the spine, edges of the text block, or an inlay in...[more]