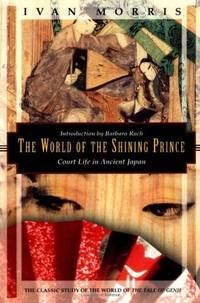 The World of the Shining Prince: Court Life in Ancient Japan (Kodansha Globe)

The World of the Shining Prince: Court Life in Ancient Japan (Kodansha Globe)

Ivan Morris studied Japanese language and culture at Harvard University while serving in the Intelligence Section of the U.S. Navy Reserves. After receiving his Ph.D. from the University of London in 1951, he worked for the Far East Section of the BBC as well as for the Japan and Pacific departments of the British Foreign Office. He lived in Tokyo for several years, writing, lecturing, and teaching. In 1960 he joined what would later be renamed the Department of East Asian Languages and Cultures at Columbia University, where he served as department chair. He was elected a Fellow of St. Anthony’s College at Oxford in 1966. Morris published numerous books on Japanese history, literature, and politics and produced distinguished translations of classical and contemporary Japanese works. He died in 1976.

Seller rating:
This seller has earned a 3 of 5 Stars rating from Biblio customers.
Biblio.co.uk member since: 2004
College Park, Maryland
Ask Seller a Question

Fair
is a worn book that has complete text pages (including those with maps or plates) but may lack endpapers, half-title, etc....[more]
pub
Common abbreviation for 'published'