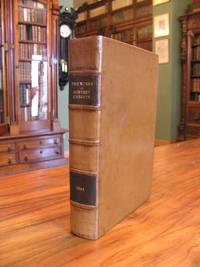 Works. The Woorkes of Geffrey Chaucer, Newly Printed, with Divers Addicions, whiche were Never in Printe Before: With the siege and destruccion of the worthy citee of Thebes, compiled by Jhon Lidgate, Monke of Berie. As in the table more plainly dooeth appere. First issue of the Stowe Edition.

Works. The Woorkes of Geffrey Chaucer, Newly Printed, with Divers Addicions, whiche were Never in Printe Before: With the siege and destruccion of the worthy citee of Thebes, compiled by Jhon Lidgate, Monke of Berie. As in the table more plainly dooeth appere. First issue of the Stowe Edition.

by Goeffrey Chaucer, edited and augmented by John Stowe

Full calf. Probable first issue of the Stowe Edition with Chaucer's arms dated 1560 and before woodcut additions. Relative to the precedence of issues of the 1561 Stowe edition David R. Carlson ("The Woodcut Illustrations in Early Printed Editions of Chaucer's Canterbury Tales," in Chaucer Illustrated: Five Hundred Years of The Canterbury Tales in Pictures [British Library, 2003]) states "the most plausible explanation seems to be that the printer and publisher of the [Stowe] edition, came into possession of the woodcuts belatedly after most of the press work for the edition had been done. After obtaining the blocks, they ran up a new issue of the beginning of the book, incorporating a "General Prologue" illustrated with woodcut. In all documented cases, the unillustrated [i.e. first]"General Prologue" occurs with a title page showing the Chaucer arms, dated 1560 at the top of the shield. A different title-page, dated 1561, is found in copies incorporating the [woodcut] illustrated General Prologue." (v. also David R. Carlson, "Woodcut Illustrations of the Canterbury Tales, 1483-1602). More specifically a recent Robert Temple Catalogue adds: "The first three gatherings [in the 1561 second issue] were entirely reprinted, this being done to permit the inclusion of twenty-two wood-cut illustrations in the Prologue to the Canterbury Tales the signatures running [floret]4 ([floret]iii being mis-signed Aiii), +6, A4, B - I6. instead of the [floret]4, A - I6. of the [first] issue. In the illustrated [i.e. second] issue some damage to the wood-cut frame of the first secondary title is apparent which is not evident in the [first] issue: a crack in the wood extends from the centre of the lower edge, up through the box identifying King Henry IIII to just left of centre of the title box, and another from the top left-hand corner of the title-box, through the box identifying King Henry VII and ending, apparently at a worm-hole, in its top rules. STC, 2nd edition, unaccountably and without assigning a reason, lists these two issues in the reverse order - despite the evidence in the illustrated issue of the later date on the title-page, the obviously interpolated gathering `+' (which contains the first six illustrated leaves of ten, the rest being in the variant, short, gathering `A'), and the extended splitting of the wood-block on the title-page to the Canterbury Tales which shows only a slight split at the extreme tail in the [first] printing, and no worm-hole." Professional restoration to the present copy include wash and repair of title page with ancient replacement of top inch and periphery of same not affecting text; repapering of Prologue gutters; new pastedowns & fly papers. All that said, a complete copy without loss of text. Light peripheral worming. Handsomely bound in appropriate period style full ruled English calf, five raised bands, six compartments; morocco title & date labels. This copy was presented by the Durants to Wellesley College then sold in 1912 to George Herbert Palmer & then to Lewis Kennedy Morse. Folio, 12 3/16 x 8 1/2 inches (310 x 215 mm); [5], ccclxxviii leaves. Divisional title pages of the "Caunterburie Tales" and "Romaunt of the Rose" (both borrowed from Edward Hall's 1550 Vnion of the two noble and illustre famelies of Lancastre & Yorke) in ornamental border, showing the ascent of Henry VIII. Large woodcut of the Knight at the head of his tale (recto of B1). Collation: Floret4; A-I6; K-U6; Aa-Ii6. Kk-Pp6; Q-U6; X-Z6; Aaa-Iii6; Kkk-Uuu[8]. Numerous oddities in foliation following [CCXXIV] though catchwords and signatures remain constant. A handsome & supple copy beautifully printed in fifty-six line, two-column black-letter Gothic. The 1561 Stowe edition is probably the one known to William Shakespeare and Edmund Spenser and presents some nineteen poems here first printed from manuscript sources. (STC5076) Foregoing copyright 2021.; Folio ; Additional images and further information provided upon request. ; All shipments through USPS insured Priority Mail.

30 day return guarantee, with full refund including shipping costs for up to 10 days after delivery if an item arrives misdescribed.

Seller rating:
This seller has earned a 5 of 5 Stars rating from Biblio customers.
Biblio.co.uk member since: 2008
Ft Lauderdale, Florida
Ask Seller a Question

We are a brick & mortar store located between I95 and the Florida Turnpike. We focus on the visual aspects of books and the book as artifact. We have large Art and Graphic Art sections including haute couture magazines but also carry Architecture, Ancient & Classical History, Performing Arts and Books on Books & Antiques. We have a large selection of Antiquarian Books, Antique maps & Antique prints. Hours by chance or appointment.

Gatherings
A term used in bookbinding, where a gathering of sheets is folded at the middle, then bound into the binding together. The...[more]
raised band(s)
Raised bands refer to the ridges that protrude slightly from the spine on leather bound books.  The bands are created...[more]
folio
A folio usually indicates a large book size of 15" in height or larger when used in the context of a book description....[more]
calf
Calf or calf hide is a common form of leather binding.  Calf binding is naturally a light brown but there are ways to treat...[more]
tail
The heel of the spine.
morocco
Morocco is a style of leather book binding that is usually made with goatskin, as it is durable and easy to dye. (see also...[more]
leaves
Very generally, "leaves" refers to the pages of a book, as in the common phrase, "loose-leaf pages." A leaf is a single sheet...[more]
title page
A page at the front of a book which may contain the title of the book, any subtitles, the authors, contributors, editors, the...[more]
New
A new book is a book previously not circulated to a buyer. Although a new book is typically free of any faults or defects,...[more]