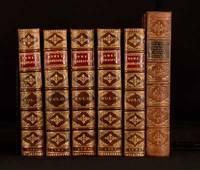 The Works of Mr William Shakespear

The Works of Mr William Shakespear

London - Jacob Tonson, 1709 Book. Very Good. Hardcover. First edition.. Six volumes of Tonson's dramatic works ofShakespeare. Volumes I-V are in uniform bindings as a set, with the pages trimmed down. Volume VI is bound in a different half calf binding with larger page sizes due to their not being trimmed as closely as volumes I-V. The sixth volume could be trimmed and bound to match. This is the first edition of this work, edited by Nicholas Rowe. It is the first edition of Shakespeare's works to be published in the eighteenth century and has been referred to as the first 'modern' edition of the plays. As stated to the title page of volume I this set was originally published as six volumes as seen here. A seventh volume was published by a different publisher, E Curll, a year later in 1710 whichaddedhis poetry and critical remarks on his plays by C Gildon and is sometimes seen bound together with this set. This set contains all six volumes of Shakespeare's dramatic works edited byRowe and isas originally published. Due to this work, Rowe is widely considered to be the first editor of Shakespeare. His practical knowledge helped him to divide the plays into both scenes and acts, including the entrances and exits of the players. He was also one of the first to prefix each play with a list of the dramatis personae and to write a 'life of the author'. The work is based on the somewhat textually corruptFourth Folio. To volume VI signature A4 under the 'here' of 'where. ' and to volume I signature 'A' under the 'G of Goodness'. This copy is not the lineatim reprint issued in the same year. [ESTC T138296]Rowe basing his edition on the Fourth Folio paved the way for eighteenth century editors of Shakespeare, as subsequently they tended to use theFourth Folio as their basis. This includes Alexander Pope. Jacob Tonson was an eighteenth-century English bookseller and publisher best known for having obtained a copyright on the plays of William Shakespeare by buying the rights of the heirs of the publisher of the Fourth Folio after the Statue of Anne came into effect, the first statute to provide for copyright regulated by the government rather than private partiesEach play has a separate title page with the imprint 'printed in the year 1709'Volume I The Tempest, Two Gentlemen of Verona, The Merry Wives of Windsor, Measure for Measure, The Comedy of Errors, Much AdoAbout Nothing, Love's Labour's Lost. Volume II: A Midsummer Night's Dream, Merchant of Venice, As You Like It, Taming of the Shrew, All's Well that Ends Well, Twelfth night, The Winter's TaleVolume III: King John, King Richard II, King Henry IV Part I, Henry IV Part II, King Henry V, King Henry VI Part I, King Henry VI Part II. Volume IV: King Henry VI Part III, Richard III, King Henry VIII, Troilus and Cressida, Coriolanus, Titus Andronicus. Volume V: Romeo and Juliet, Timon of Athens, Julius Caesar, Macbeth, Hamlet, King Lear, Othello. VI: Anthony and Cleopatra, Cymbeline, Pericles Prince of Tyre, London Prodigal, Tomas Lord Cromwell, Sir John Oldcastle, The Puritan, a Yorkshire Tragedy and Locrine. This is the first ever illustrated works of Shakespeare, with a plate per play and frontispiece to each volume. With a frontispiece and eight plates to volume I,seven plates to volume II, seven plates to volume III, six plates to volume IV, frontispiece and seven plates to volume V and a frontispiece and nine plates to volume VI. Volumes II, III and IV arebound withoutthe frontispiece of Shakespeare (indentical in each volume). Volume I, V and VI, have this frontispiece present. Volume II, uses Midsummer Night's Dream frontis instead, volume III uses King John frontis as main frontispiece, volume IV uses the frontis to Henry VI part 3. With the bookplate of Sir Archibald Grand of Monymoske, Bart, to the frontpastedown of volume I. Grant wasa politician and agricultural improver. From the antiquarian library of Christopher Rowe. Christopher Rowe was a schoolmaster in Norwich and then in Bristol. Throughout his career heinspired many to love literature, h.

Books are sent on approval and may be returned in like condition for any reason within 14 days of receipt. Responsibility of return to be with the purchaser.

Seller rating:
This seller has earned a 5 of 5 Stars rating from Biblio customers.
Biblio.co.uk member since: 2007
BATH, Somerset
Ask Seller a Question

Welcome to Rooke Books Antiquarian BooksellerWe are a small team dedicated to bringing you very scarce books at reasonable prices. We specialise in rare and hard to come by works on all subjects over the last 500 years, together with modern first editions and decorative sets and bindings. Our library has something for every interest and specialism. We deliver worldwide using a fully tracked and insured courier delivery service. Where are We?Based in the literary city of Bath, our offices are housed in the Eastern Dispensary. Built in 1845, the building originally existed as a charitable institution providing medical care.The building now houses our collection of over twenty thousand books and has five full time members of staff.

reprint
Any printing of a book which follows the original edition. By definition, a reprint is not a first edition.
calf
Calf or calf hide is a common form of leather binding.  Calf binding is naturally a light brown but there are ways to treat...[more]
A.N.
The book is pristine and free of any defects, in the same condition as ...[more]
bookplate
Highly sought after by some collectors, a book plate is an inscribed or decorative device that identifies the owner, or former...[more]
First Edition
In book collecting, the first edition is the earliest published form of a book. A book may have more than one first edition in...[more]
plate
Full page illustration or photograph. Plates are printed separately from the text of the book, and bound in at production. I.e.,...[more]
title page
A page at the front of a book which may contain the title of the book, any subtitles, the authors, contributors, editors, the...[more]
folio
A folio usually indicates a large book size of 15" in height or larger when used in the context of a book description....[more]