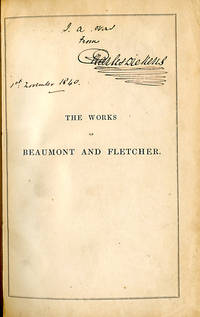 THE WORKS OF BEAUMONT AND FLETCHER. WITH AN INTRODUCTION BY GEORGE DARLEY

THE WORKS OF BEAUMONT AND FLETCHER. WITH AN INTRODUCTION BY GEORGE DARLEY

London: Edward Moxon, 1840. Two volumes. Polished tan calf, spines gilt, with gilt labels (small repairs), t.e.g. by Sotheran. Gift inscription (to Emily Vine from her mother dated 1857 on title of each volume); extremities, raised bands and edges rubbed; covers a little worn and soiled, otherwise a good set. From the collection of William E. Self, with his book label in each volume. An excellent association copy, with a presentation inscription on the half-title in volume one: "J.A. Overs / From / Charles Dickens [paraph] / 1st November 1840." John A. Overs (1808-1844), a London cabinet-maker by training, educated himself and pursued his interests in writing. Dickens became his most important literary friend, providing comments on his stories and poems, introducing him to newspaper editors and offering financial assistance when Overs became ill. Overs first wrote to Dickens in January 1839 hoping to have some poetry placed in Bentley's MISCELLANY, and Dickens recommended several pieces to his successor as editor. "Perhaps more importantly, however, Dickens advised Overs on the publication of his EVENINGS OF A WORKING MAN (1844), and wrote the preface to the work. . . . In his preface Dickens is careful to emphasize Overs's autonomy, stating that although he had given advice to the author on this collection of short pieces, he 'never altered them, otherwise than by recommending condensation now and then,' and assuring the reader that the volume's sketches represented Overs's 'genuine work, as they have been his sober and rational amusement'" - DNB. The two men remained close until Overs's death in 1844: "When poor Overs was dying he suddenly asked for a pen and ink and some paper, and made up a little parcel for me which it was his last conscious act to direct. She [Amelia Overs] told me this and gave it me. I opened it last night. It was a copy of his little book in which he had written my name, 'With his devotion.' I thought it simple and affecting of the poor fellow" (Dickens to John Forster [17 Dec. 1844] in the LETTERS OF CHARLES DICKENS, Pilgrim Edition, 4,240).

Seller rating:
This seller has earned a 5 of 5 Stars rating from Biblio customers.
Biblio.co.uk member since 2006
New Haven, Connecticut
Ask Seller a Question

gilt
The decorative application of gold or gold coloring to a portion of a book on the spine, edges of the text block, or an inlay in... [more]
soiled
Generally refers to minor discoloration or staining.
Poor
A book with significant wear and faults. A poor condition book is still a reading copy with the full text still readable. Any... [more]
raised band(s)
Raised bands refer to the ridges that protrude slightly from the spine on leather bound books. The bands are created in the... [more]
calf
Calf or calf hide is a common form of leather binding. Calf binding is naturally a light brown but there are ways to treat the... [more]
edges
The collective of the top, fore and bottom edges of the text block of the book, being that part of the edges of the pages of a... [more]
Association copy
An association copy is a copy of a book which has been signed and inscribed by the author for a personal friend, colleague, or... [more]