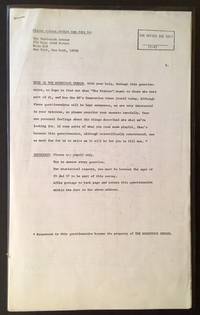 New York: The Woodstock Census. Original wraps. Very Good +. The uncommon original mid to late 70s census (or questionnaire) issued by the Woodstock Census of New York in the decade after the August 1969 concert to "scientifically" measure current attitudes and likes and dislikes from the 60's Generation. The "official" census, made up of 22 stapled, mimeographed pages, asks the participant to rank his or her take on hundreds of different issues, such as "Armpit hair on women", "Black light posters", "Natural body odor", "Capitalism", "Underground newspapers", etc. The census, as campy as it seems today, represented an ernest effort to gauge how attitudes inevitably shifted in the intervening 5-10 years. Folio, crisp and clean, with very light creasing along the top-edges. Although unverified, there is some thinking that New York School poet and provocateur Ted Berrigan played a role in the composition of the census. From the title page: "THIS IS THE WOODSTOCK CENSUS. With your help, throught this questionnaire, we hope to find out what "The Sixties" meant to those who were part of it, and how the 60's Generation views itself today. Although these questionnaires will be kept anonymous, we are very interested in your opinions, so please consider your answers carefully. Your own personal feelings about the things described are what we're looking for. If some parts of what you read seem playful, that's because this questionnaire, although scientifically constructed, was as much fun for us to write as it will be for you to fill out"

Seller rating:
This seller has earned a 3 of 5 Stars rating from Biblio customers.
Biblio.co.uk member since: 2005
Waccabuc, New York
Ask Seller a Question

folio
A folio usually indicates a large book size of 15" in height or larger when used in the context of a book description....[more]
crisp
A term often used to indicate a book's new-like condition. Indicates that the hinges are not loosened. A book described as crisp...[more]