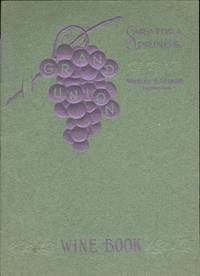 Baltimore and other places, 1906. The meticulous wine-related records of Douglas H. Thomas (1847-1919; President of Merchants' National Bank, Baltimore, Maryland). A prominent member of Baltimore society in the late 19th and early 20th century, and a connoisseur of fine wines, Thomas traveled widely, retaining menus from restaurants he visited in London, Paris, Nice, Lucerne, Moscow, etc.; this collection includes more than one hundred fifty items, including thirty-five wine catalogues and lists issued by importers, major vintners, private clubs and hotels, sixteen hotel and restaurant wine lists, three auction and sale lists, eight menus, several manuscript inventories of Thomas's wine collection, and more than eighty-five pieces of correspondence and invoices from Taylor's importers and agents. Four of the menus are from the Café de Paris, with color cover illustrations by the artist Jane Atche; a fifth menu is illustrated by Gregoire Calvet. Thomas's correspondents included Bailey & Co., Hedges & Butler, and Robinson & Payne in London; Sazerac de Forge & Fils, Moet & Chandon, F. Woltner, Brossault & Co., Dignimont Frères, and P. Louis in Paris; and Ad. Chr. Engelbrecht in Mainz. Thomas inherited both his interest in wine and a portion of his large collection from his father John Hanson Thomas, a Baltimore physician, writing in a 1906 letter that "I have quite a large cellar of champagnes, clarets, and Rhine wines, all of which are vintage wines of my own importation. My father was a great connoisseur of Madeira and at his death he bequeathed me a large amount of vintages of 1800 to 1845. This stock I have increased somewhat by purchases when I had the opportunity of procuring the very highest grades of wine, which is very rare, but I have now a stock of perhaps seven to eight hundred bottles which is probably one of the largest stocks of old Madeira in the country." Taylor considered Madeira to be "a gentleman's wine and the king of wines, and the love of it is an inherited one, hence I desire to transmit the means of its enjoyment to my children." Among his purchases of Madeira were a dozen bottles from Thomas K. Carey, originally imported in 1840 by a Charleston, South Carolina, resident and carefully hidden by the owner, sealed under the pavement in a cellar during the Civil War; one of the finest wines in his collection was one he inherited, called the Marshall wine '1805,' which once belonged to his father's great uncle Chief Justice John Marshall. A four-page inventory of the collection is available upon request. A very good lot in all respects.