Home Raptis Rare Books Where the Wild Things Are. 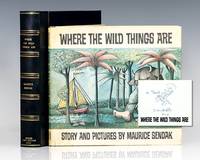 New York: Harper & Row, Publishers, 1963. First edition in the first-issue dust jacket of one of the scarcest and most desirable books in modern children's literature. Oblong quarto, original cloth backed pictorial paper boards. Inscribed by Maurice Sendak with a drawing of Mickey Mouse on the half-title page, "For David, Hi! Maurice Sendak May '80." It was Walt Disney's 1940 feature film Fantasia, starring Mickey Mouse, that inspired 12-year old Maurice Sendak to become a cartoonist. Born the same year that the famous anthropomorphic cartoon character made his first appearance in the the 1928 short film Steamboat Willie, Sendak described Mickey Mouse as "the emblem of happiness and funniness [and] the little brother I always wanted" (Romano, 2012). One of the most avid collectors of Mickey Mouse memorabilia, Sendak has noted that early appearances of Mickey in both film and collectible figurines had teeth, which were later omitted as his character became more popular and his more cruel tendencies were transferred to other characters. Sendak's characters, with plenty of teeth, came to embody not just the adorable and benevolent, but the frightening and dangerous; evoking feelings in the children who read his stories quite unlike those encouraged by the typical illustrated children's tale. Fine in a near fine first-issue dust jacket. This is the correct first state of the dust jacket with no mention of the Caldecott award, and a $3.50 price at top of front flap. Housed in a custom half morocco clamshell box. An exceptional example, rare and desirable in this condition and with a drawing of the character that inspired Sendak's career, Mickey Mouse. Hailed as "the Picasso of children's books," Maurice Sendak produced more than 85 books, of which Where the Wild Things Are is undeniably the most famous, being one of the ten best-selling children's books of all time. "Wild Things!' When Max's sojourn among them unfolded in kinematic splendor in 1963, adults trembled and children reveled. Reaching back into his own Brooklyn childhood, Sendak created the enduring child-hero Max, who overcomes his fears and achieves catharsis in a colorful fantasy tableau. The book was awarded the 1964 Caldecott Medal by the American Library Association" (NYPL Books of the Century 212). Basis for the 2009 film directed by Spike Jonze starring Max Records and features the voices of James Gandolfini, Paul Dano, Lauren Ambrose, Forest Whitaker, Catherine O'Hara, and Chris Cooper.

Where the Wild Things Are is a 1963 children's picture book by American writer and illustrator Maurice Sendak, originally published by Harper & Row. The book has been adapted into other media several times, including an animated short, a 1980 opera, and, in 2009, a live-action feature film adaptation. According to HarperCollins, the book has sold over 19 million copies worldwide as of 2008.

Read more: Identifying first editions of Where the Wild Things Are.

jacket
Sometimes used as another term for dust jacket, a protective and often decorative wrapper, usually made of paper which wraps...[more]
quarto
The term quarto is used to describe a page or book size. A printed sheet is made with four pages of text on each side, and the...[more]
Cloth
"Cloth-bound" generally refers to a hardcover book with cloth covering the outside of the book covers. The cloth is stretched...[more]
inscribed
When a book is described as being inscribed, it indicates that a short note written by the author or a previous owner has...[more]
morocco
Morocco is a style of leather book binding that is usually made with goatskin, as it is durable and easy to dye. (see also...[more]
fine
A book in fine condition exhibits no flaws. A fine condition book closely approaches As New condition, but may lack the...[more]
clamshell box
A protective box designed for storing and preserving a bound book or loose sheets. A clamshell box is hinged on one side, with...[more]
First Edition
In book collecting, the first edition is the earliest published form of a book. A book may have more than one first edition in...[more]
first state
used in book collecting to refer to a book from the earliest run of a first edition, generally distinguished by a change in some...[more]