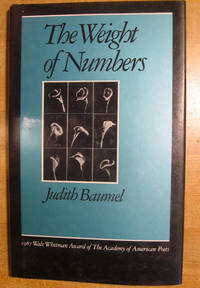 The Weight of Numbers

The Weight of Numbers

Middletown, Connecticut: Wesleyan University Press, 1988. viii, 62 pp. Fine book and dj, but that someone has written 'London' on the fore-edge. Baumel's poems have appeared in Agni, The American Poetry Review, The Antioch Reivew, The Harvard Advocate, Boulevard, The Denver Quarterly, Gradiva, The Nation, The New Republic, The New Yorker, The Paris Review, Parnassus, Pequod, Ploughshares, and Prometheus. 'They were decisive icy fingers / of geology class brought home, stretching / into the parkway.'--from Roches Moutonnees. 1987 recipient of the Walt Whitman Award from the American Academy of Poets. Baumel has been director of the Poetry Society of America, she won a poetry fellowship from the New York Foundation for the Arts. She has been a lecturer at Harvard University, Boston University, and City College of New York. . First Edition. Cloth. Very Good/Very Good. 8vo - over 7¾" - 9¾" tall.

Veery Books' specialties: (1) Music scores (Symphonic, Chamber, Choral, and Solo repertoire, Full conductor's scores and study scores and parts throughout the range of classical music, including rare or first editions), bibliographies, histories, biographies, auction catalogs, literature and ephemera related to classical music and classical composers and musicians. (2) American popular music from the early 19th century to the 1940s. (3) Poetry and literature with emphasis on American poetry and fiction. (4) Rare and unusual American imprints from the 19th century. (5) Bibliographies, Bookseller's catalogs, Auction catalogs for books, manuscripts, ephemera, prints, and art. Veery Books strives to provide accurate bibliographic and condition descriptions including photographs for each offering and where possible to offer quotations or unusual facts about the offering. Veery Books will be happy to assist you in your book search and welcomes inquiries regarding thousands of yet uncatalogued musical scores, bookseller's and auction catalogs.

A.N.
The book is pristine and free of any defects, in the same condition as ...[more]
First Edition
In book collecting, the first edition is the earliest published form of a book. A book may have more than one first edition in...[more]
fine
A book in fine condition exhibits no flaws. A fine condition book closely approaches As New condition, but may lack the...[more]
Cloth
"Cloth-bound" generally refers to a hardcover book with cloth covering the outside of the book covers. The cloth is stretched...[more]
New
A new book is a book previously not circulated to a buyer. Although a new book is typically free of any faults or defects,...[more]