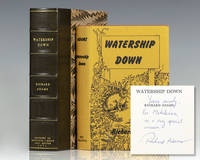 London: Rex Collings, 1972. First edition of Richard Adams' timeless classic novel. Octavo, original brown cloth, folding map. Association copy, inscribed by the author on the title page to fellow bestselling children's author Madeleine L'Engle, "Yours sincerely, For Madeleine, on a very special occasion Richard Adams." From the library of Madeleine L'Engle. Both Adams and L'Engle were unknown in the publishing world until their singular best-selling award-winning children's novels were finally published after numerous rejections. Both authors' works were also published in their mid-lives after they had married and had children. At the insistence of his daughters, Adams began writing the story he had told them on a car trip in 1966 at the age of 46 and after four publishers and three writers' agencies turned down the manuscript, Rex Collings agreed to publish the work in 1972. The book gained immediate international acclaim and went on to win the Carnegie Medal, Guardian Prize, and was adapted into several feature films and television series. L'Engle's best-selling work A Wrinkle in Time was also initially rejected by at least 26 publishers. It was not until a close personal friend of L'Engle's mother introduced her to John C. Farrar of Farrar, Straus and Giroux that the work was finally published in 1962. L'Engle was 44 years old at the time of publication and A Wrinkle in Time went on to win the Newbery Medal, the Sequoyah Book Award, the Lewis Carroll Shelf Award, and inspired two film adaptations, both by Disney: a 2003 television film directed by John Kent Harrison; and a 2018 theatrical film directed by Ava DuVernay. Near fine in a near fine price-clipped dust jacket with light shelf wear. Housed in a custom half morocco clamshell box. An exceptional association.   Although Watership Down was rejected by 13 publishers before Collings accepted it, it has never been out of print, and is Penguin Books' best-selling novel of all time. It won both the Carnegie Medal and the Guardian Prize. The title refers to a hill in the north of Hampshire, England, near the area where Adams grew up. The story has its roots in the tales that Richard Adams made up for his young daughters during long car journeys. As he explained in 2007 in an interview with the BBC, he "began telling the story of the rabbits . . . improvised off the top of my head, as we were driving along." He based the struggles of the animals on the struggles he and his friends encountered during the Battle of Oosterbeek in 1944. The daughters insisted he write it down—"they were very, very persistent." After some delay he began writing in the evenings and completed it 18 months later.

Watership Down is a heroic fantasy novel about a small group of rabbits, written by British author Richard Adams. Although the animals in the story live in their natural environment, they are anthropomorphised, possessing their own culture, language, proverbs, poetry, and mythology. Evoking epic themes, the novel recounts the rabbits' odyssey as they escape the destruction of their warren to seek a place in which to establish a new home, encountering perils and temptations along the way.

After hearing of Richard Adams' death, I turned once again to a book I have long considered to be a best friend. This adventure story pulls you into a world unseen by humans. The characters are human enough to relate to but animal enough to remain rabbits. The story is captivating and relevant. No matter how many times I read it, I can never put it down while reading the last quarter, it's so suspenseful and exciting.

The characters have been beloved of me for many years and I only hope that I have Fiver's insight, Hazel's authority, Bigwig's strength, and Blackberry's wits.

title page
A page at the front of a book which may contain the title of the book, any subtitles, the authors, contributors, editors, the...[more]
inscribed
When a book is described as being inscribed, it indicates that a short note written by the author or a previous owner has...[more]
First Edition
In book collecting, the first edition is the earliest published form of a book. A book may have more than one first edition in...[more]
Cloth
"Cloth-bound" generally refers to a hardcover book with cloth covering the outside of the book covers. The cloth is stretched...[more]
octavo
Another of the terms referring to page or book size, octavo refers to a standard printer's sheet folded four times, producing...[more]
shelf wear
Shelf wear (shelfwear) describes damage caused over time to a book by placing and removing a book from a shelf. This damage is...[more]
fine
A book in fine condition exhibits no flaws. A fine condition book closely approaches As New condition, but may lack the...[more]
morocco
Morocco is a style of leather book binding that is usually made with goatskin, as it is durable and easy to dye. (see also...[more]
Association copy
An association copy is a copy of a book which has been signed and inscribed by the author for a personal friend,...[more]
clamshell box
A protective box designed for storing and preserving a bound book or loose sheets. A clamshell box is hinged on one side, with...[more]
jacket
Sometimes used as another term for dust jacket, a protective and often decorative wrapper, usually made of paper which wraps...[more]