Shop Now
Home Textbooks The Warmth of Other Suns; The Epic Story of America's Great Migration 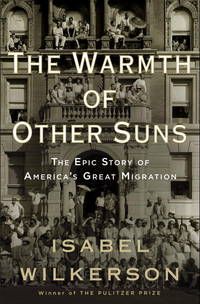 The Warmth of Other Suns; The Epic Story of America's Great Migration

The Warmth of Other Suns; The Epic Story of America's Great Migration

New York: Random House, 2010. Later printing. Hardcover. Very good/Very good. x, 622, [8] pages. Epilogue. Notes on Methodology. Afterword. Notes. Index. Signed by author sticker on front of DJ. DJ has printed on it "National Book Critics Circle Award Winner. Complementary event bookplate on fep. Signed by the author bookplate on half-title page. Isabel Wilkerson (born 1961) is an American journalist and the author of The Warmth of Other Suns: The Epic Story of America's Great Migration and Caste: The Origins of Our Discontents. She was the first woman of African-American heritage to win the Pulitzer Prize in journalism. After fifteen years of research and writing, she published The Warmth of Other Suns: The Epic Story of America's Great Migration, which examines the three geographic routes that were commonly used by African Americans leaving the southern states between 1915 and the 1970s, illustrated through the personal stories of people who took those routes. During her research for the book, Wilkerson interviewed more than 1,000 people who made the migration from the South to Northern and Western cities. The book hit number 5 on the New York Times Bestseller list for nonfiction and has since been included in lists of best books of 2010 by many reviewers, including The New York Times, The Los Angeles Times, The New Yorker, Amazon, The Washington Post, The Economist, Atlanta Magazine and The Daily Beast. In 2011 the book won the National Book Critics Circle Award (Nonfiction). The book also won the Anisfield-Wolf Award for Nonfiction, the Mark Lynton History Prize, the Sidney Hillman Book Prize, the Heartland Prize for Nonfiction. Derived from a Kirkus review: In her ambitious debut, Pulitzer Prize-winning journalist Wilkerson examines the Great Migration of African-Americans from World War I to the 1970s. The author interviewed more than 1,200 people for this sweeping history, which focuses mainly on the personal stories of three Southern African-Americans who uprooted their lives to move to other parts of America: Ida Mae Brandon Gladney, a sharecropper's wife who moved from rural Mississippi in the midst of the Great Depression, eventually landing in Chicago; George Swanson Starling, who went from picking fruit in north Florida to becoming a train attendant in 1940s New York; and Robert Joseph Pershing Foster, an accomplished surgeon who moved from northern Louisiana to Los Angeles in the 1950s. Wilkerson uses their histories to tell the larger story of how institutionalized racism helped spur the Great Migration of millions of Southern African-Americans to northern, midwestern and western states. Gladney and her family decided to leave Mississippi after a relative, suspected of stealing turkeys, was nearly beaten to death by whites. Starling, after leading an attempted sit-down strike of some African-American fruit-pickers, fled Florida under threat of death. Foster moved to California because no Southern hospitals would hire an African-American surgeon; whites in the South wouldn't even call him "Dr. Foster," but "spat out 'Doc' as if they were addressing the cook." Though each of Wilkerson's subjects faced discrimination in the North as well, they felt a greater sense of freedom to pursue their own visions of the American dream. The author deftly intersperses their stories with short vignettes about other individuals and consistently provides the bigger picture without interrupting the flow of the narrative. Wilkerson's focus on the personal aspect lends her book a markedly different, more accessible tone. Her powerful storytelling style, as well, gives this decades-spanning history a welcome novelistic flavor. An impressive take on the Great Migration, and a truly auspicious debut.

Isabel Wilkerson won the 1994 Pulitzer Prize for Feature Writing for her reporting as Chicago bureau chief of The New York Times. The award made her the first black woman in the history of American journalism to win a Pulitzer Prize and the first African American to win for individual reporting. She won the George Polk Award for her coverage of the Midwest and a John Simon Guggenheim Fellowship for her research into the Great Migration. She has lectured on narrative writing at the Nieman Foundation at Harvard University and has served as Ferris Professor of Journalism at Princeton University and as the James M. Cox Jr. Professor of Journalism at Emory University. She is currently Professor of Journalism and Director of Narrative Nonfiction at Boston University. During the Great Migration, her parents journeyed from Georgia and southern Virginia to Washington, D.C., where she was born and reared.

Read more: Identifying first editions of The Warmth of Other Suns; The Epic Story of America's Great Migration

Books are offered subject to prior sale. Satisfaction guaranteed. If you notify us within 7 days that you are not satisfied with your purchase, we will refund your purchase price when you return the item in the condition in which it was sold.

Seller rating:
This seller has earned a 5 of 5 Stars rating from Biblio customers.
Biblio.co.uk member since: 2005
Silver Spring, Maryland
Ask Seller a Question

Founded and operated by trained historians, Ground Zero Books, Ltd., has for over 30 years served scholars, collectors, universities, and all who are interested in military and political history.

Much of our diverse stock is not yet listed on line. If you can't locate the book or other item that you want, please contact us. We may well have it in stock. We welcome your want lists, and encourage you to send them to us.

bookplate
Highly sought after by some collectors, a book plate is an inscribed or decorative device that identifies the owner, or former...[more]