home rare books Travel and Exploration More Rare Books from The Wild Muse Travels through the interior parts of North America in the years 1766, 1767, and 1768 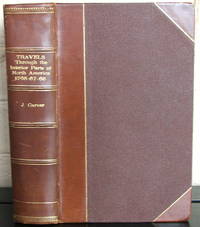 London: Printed for the Author, 1778. First edition. Bound in 3/4 calf with raised bands and gilt titles, decorative endpapers. Published London: Printed for the author, 1778. 8vo., 5 1/2" x 8 1/4", xvi, [17]-543, [1] pp. errata page, two folding, engraved maps that are fully hand-colored, and four plates - Falls of St. Anthony on the Mississippi, An (Indian) Pipe of Peace, and two plates of native peoples. Includes a Chippewa vocabulary. Large bookplate of Otto Oren Fisher on front pastedown. Jonathan Carver (1710-1780) was an explorer, mapmaker, author, and one of the first white men to explore and map areas of Minnesota and Wisconsin. Part of a small expedition to map uncharted territory west of the Mississippi, he visited many of the Native American groups residing in the area. He "penetrated farther into the West than any other English explorer before the Revolution" (Howes). While French explorers had been in the area earlier, they did not leave behind detailed maps or journals as Carver did. He explored the headwaters of the Mississippi and wintered with a tribe of Dakota in the Great Lakes region, recording their customs. A classic of American travel, it is one of the earliest and best accounts of pre-Revolution exploration. A compelling narrative of travel and adventure, it was highly inspirational to post-Independence explorers, and has been published in more than 30 editions. In addition to his comments on the natural history and the Native Americans of the West, this work contains the first published mention of the word "Oregon." Wear at the tips, outer hinge starting, small tape repair to the stub of first map and free endpaper, some offsetting from plates and maps to facing page, else near fine, clean, bright, unmarked. A very attractive example. . 1st. Hard. Very Good Plus/No Jacket, As Issued. 8vo.

Seller rating:
This seller has earned a 5 of 5 Stars rating from Biblio customers.
Biblio.co.uk member since 2005
Granville, New York
Ask Seller a Question

About The Wild Muse

First Edition
In book collecting, the first edition is the earliest published form of a book. A book may have more than one first edition in... [more]
jacket
Sometimes used as another term for dust jacket, a protective and often decorative wrapper, usually made of paper which wraps... [more]
errata
Errata: aka Errata Slip A piece of paper either laid in to the book correcting errors found in the printed text after being... [more]
hinge
The portion of the book closest to the spine that allows the book to be opened and closed.
fine
A book in fine condition exhibits no flaws. A fine condition book closely approaches As New condition, but may lack the... [more]
raised band(s)
Raised bands refer to the ridges that protrude slightly from the spine on leather bound books.  The bands are created... [more]
gilt
The decorative application of gold or gold coloring to a portion of a book on the spine, edges of the text block, or an inlay in... [more]
bookplate
Highly sought after by some collectors, a book plate is an inscribed or decorative device that identifies the owner, or former... [more]
calf
Calf or calf hide is a common form of leather binding.  Calf binding is naturally a light brown but there are ways to treat... [more]