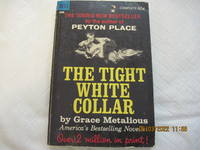 Light toning, else content appears as near new, , unread and unblemished with Good+ pictorial wraps displaying Minor surface/edge wear, as shown. Initials "NJ" have been punched out of face of front wrap.

A narrative gift and a sense of pace provide the sum total of Grace Metalious' contribution in this repeat performance of Peyton Place. Only this time, she has not thought it necessary to hew to a central theme. Each one of the myriad plots seems of equal importance- or, for this reader, unimportance. Once again, she has depicted a small, tight-knit and snobbish northern New England community. Once again the surface pattern is disrupted when fears and passions come to a boiling point. Once again there seem to be almost no characters who haven't something murky in the past- or present- to hide. Most of the secret sins have to do with sex -- normal, extra-marital, perverted, as the case may be. The Coopers, first citizens of Cooper's Mills, are represented by Nathaniel, third generation in the factories, his nephew Anthony, who writes popular novels, lusts for the ladies of easy virtue, and drinks to find surcease for tensions, and Nathaniel's gently reared Southern wife, Margery, who has born him a Mongolian idiot child- and for ten years tries to compensate for her failure as she sees it. And Anthony has his summer "fun" with the restless, dissatisfied Lisa Pappas, whose husband is hoping to hold the town to the contract of his teaching in the High School. But Doris Palmer was afraid Lisa guessed something of her well-buried past- and Doris had money and power and drive-and played on people's weakness- and got the Pappas out of town, by slander and suggestion and not too well-veiled blackmail. Even David, who taught music at the High School was afraid of Doris, and her suspicion that he was a queer. So he signed her petition -- and killed himself. In final analysis, everyone got rewards and punishments meted out in due measure -- but the reader has had to wade through a lot of clinically particularized sex to each the last page.... F

Insurance is included in the shipping & handling. Extra Charges/Fees apply on Shipments Outside The U.S. and Expedited Shipments. Oversize and/or heavy books may require additional fees. Will advise Written 6.5.22 #6948-6.0722 Biblio 6.7.22 Img.8378

7 day return guarantee, with full refund including original shipping costs for up to 7 days after delivery if an item arrives not as described. I insure all books for tracking and security. Check my feedback to see that I sell exactly as I describe.

Shipping/Handling/Insurance/Tracking Included within the continental U.S. (Free Shipping). Extra Charges/Fees apply on ALL Shipments Outside The U.S. and Expedited Shipments. Oversize and/or heavy books require additional fees. Will advise and will send invoice via Paypal for extra charges.

Seller rating:
This seller has earned a 5 of 5 Stars rating from Biblio customers.
Biblio.co.uk member since 2018
Mulvane, Kansas
Ask Seller a Question

I no longer am in a store. Retired and now I am selling a huge inventory of rare and very old books. Huge selection of Jewish books, due to liquidation of a Jewish Temple.

New
A new book is a book previously not circulated to a buyer. Although a new book is typically free of any faults or defects, "new"... [more]
good+
A term used to denote a condition a slight grade better than Good.
Biblio
The Greek root for a variety of words referring to the book, such as bibliography, bibliomania, etc. Also, one of the world's... [more]
pictorial wraps
Pictorial wraps are color illustrated covers for paperback books. Preceding mass-market paperbacks, this format brought popular... [more]