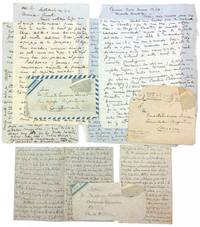 1956. Very good letters, last with some ink burn to a few characters and ragged edges; envelopes with stamps torn away.. 10 pp. 1. Letter from Alberto Granada (1922-2011), who was Che's travel partner on his famous motorcycle journey), to Che Guevara. June 21, 1955. This was written to Che in Mexico City, dated just one day before he met Raul Castro. Six pages (bifolium plus 1 sheet). 4 1/2 x 6 1/4 inches. With envelope. Addresses Che as "Dear Pig", since Che was famous for his uncleanliness. Discusses his trip to Europe, complaining that he has been "too tired to write to you but, brother, let me tell you that if you have not been to Rome, Florence and Venice you would not know how the human spirit can achieve sublimation. I have been to Madrid and I can say that the people from that city are the most hospitable in the world.  I have also managed to see the aesthetic differences between the artistic legacy of the Arabs and the palace of Charles V. I was also fortunate enough to have seen the artifacts at the Louvre, made 9 or 10,000 years ago." He then talks about his plans to save 2,000 dollars in order to travel around India for two years and work in leper colonies, as well as his long term plans to create a laboratory in Caracas, "which I think will be the place where I will settle down." In reference to his trip, he signed it "Pandit Alberto." 2. Letter from Ernesto Guevara Lynch (1900-1987), Che's father, to Che Guevara. September 20, 1954. Two sheets on rectos only. 6 3/4 x 10 1/2 inches. With envelope. Though the letter was addressed to Che while he was in Guatemala, during which time his revolutionary ideals began to foment, the date would indicate the letter missed him and was presumably routed to him there, or perhaps received by his soon-to-be wife, Hilda Gadea, a Peruvian economist who was well-connected politically as a member of the left-leaning Alianza Popular Revolucionaria Americana. Unaware or unwilling to deal with his son's transformation, he mentions to Che "I think that a stay in the United States would help you to do well in your career as a medical doctor," ending with "a big hug." 3. Letter from Ernesto Guevara Lynch (1900-1987) to Che Guevara. January 19, 1956. Two sheets on rectos only. 8 1/2 x 11 inches. With envelope of Guevara Lynch y Cia. Addressed to Che in Mexico via the Argentinean Consulate. While his father sends him hugs and mentions receiving his letters and gifts, that "Mum and Ani are in Bahia Blanca and Juan Martin is currently in Pantanillo", as well as noting the upheavals in Argentina, Che at that time was undergoing hard physical training for the revolution under the direction of Arsacio Vanegas, who had been recruited by Fidel Castro. Provenance: From the estate of Hilda Guevara, Che's daughter.