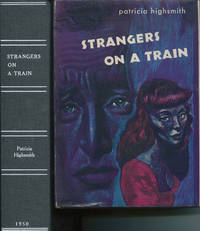 STRANGERS ON A TRAIN.

STRANGERS ON A TRAIN.

New York: Harper & Brothers, [1950]., 1950. First edition. First edition of her first and best known novel. The author is (rightly) regarded as one of the greatest of all noir authors. This, Highsmith's first novel, published when she was 29, served as the basis for the excellent 1951 Warner Brothers film directed by Alfred Hitchcock with a screenplay by Raymond Chandler, Czenzi Ormonde and Whitfield Cook; it starred Robert Walker, Ruth Roman, and Farley Granger. Inscribed by the author on the half title page: "For -- -- I am surprised !!! to see this collector's item -- on 22 Oct. 1981. Pat Highsmith." Fine in dust jacket with some light wear to the spine ends, a tiny crease to the bottom edge of the front cover panel and two tiny nicks to the bottom edge of the rear cover panel. Both the spine and the front cover are bright and unfaded. In her first novel, Highsmith revels in eliciting the unsettling psychological forces that lurk beneath the surface of everyday life. Two men meet quite casually on the Washington-to-New York train, Guy Haines, a tennis star, and Bruno Anthony, who makes an offer to exchange murders. Bruno Anthony, will kill Guy Haines' estranged wife if Guy will kill Bruno's hated father. Guy doesn't take Bruno seriously until his wife, Miriam, is found murdered in an amusement park. Guy becomes the chief suspect, which threatens his tennis career; his romantic involvement with a U.S. senator's daughter, Anne Morton; his hopes for a political career; and even his life. When Bruno realizes that Guy isn't going to kill his father, he tells Guy that he intends to establish Guy's guilt by planting his monogrammed cigarette lighter at the scene of Miriam's murder. With Anne's help, Guy attempts to stop Bruno after rushing through an important tennis match and racing to the amusement park. Filmed in 1951 and directed by Alfred Hitchcock, the movie starred Farley Granger as Guy Haines, Robert Walker as Bruno Anthony, Ruth Roman as Anne Morton, Kasey Rogers as Miriam Haines, and many others. An exceptional copy of a difficult title which is rare signed or inscribed as the author rarely signed copies of her books. Attractively housed in a cloth clamshell case with the front cover of the dust jacket reproduced on the front cover of the case and titles stamped in white on the spine.

inscribed
When a book is described as being inscribed, it indicates that a short note written by the author or a previous owner has been... [more]
half title
The blank front page which appears just prior to the title page, and typically contains only the title of the book, although, at... [more]
A.N.
The book is pristine and free of any defects, in the same condition as ... [more]
jacket
Sometimes used as another term for dust jacket, a protective and often decorative wrapper, usually made of paper which wraps... [more]
First Edition
In book collecting, the first edition is the earliest published form of a book. A book may have more than one first edition in... [more]
Cloth
"Cloth-bound" generally refers to a hardcover book with cloth covering the outside of the book covers. The cloth is stretched... [more]
fine
A book in fine condition exhibits no flaws. A fine condition book closely approaches As New condition, but may lack the... [more]
spine
The outer portion of a book which covers the actual binding. The spine usually faces outward when a book is placed on a shelf.... [more]