home Charles Agvent A STAR IS BORN ARCHIVE: The Director's Copy of the Original 1936 Script as well as Dorothy Parker's Copy of Part… 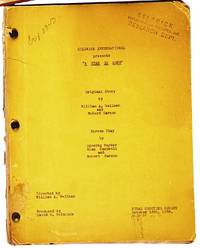 A STAR IS BORN ARCHIVE: The Director's Copy of the Original 1936 Script as well as Dorothy Parker's Copy of Part of the Script with additional material

A STAR IS BORN ARCHIVE: The Director's Copy of the Original 1936 Script as well as Dorothy Parker's Copy of Part of the Script with additional material

[Los Angeles]: Selznick International Pictures, Inc., 16 October 1936. First Edition. Softcover. Expected wear for working scripts but Very Good and stunning. Quarto (8-1/2" x 10-7/8") in stiff yellow wraps with the left margins punch-holed with metal clasps. The archive includes two copies of the Final Shooting Script (one belonging to Director William A. Wellman and the other, a partial script, to screenwriters Dorothy Parker and her husband, Alan Campbell); a SIGNED 8" x 10" Photograph of Fredric March who starred as Norman Maine (INSCRIBED "To Zoila/all good wishes/always/Fredric March/1937"); a formal 8" x 10" photograph of Parker and Campbell; and a small photograph of Wellman's secretary, Zoila Conan, holding two Oscar statues and annotated on the verso in an unknown hand: "Zoila Conan at Paramount Studios with Bob Carson's Oscar + Wm. Wellman's Oscar awarded for A STAR IS BORN made at Selznick Studios with Janet Gaynor & Fredric March." The film was nominated for 7 awards, including Best Screen Play, winning Best Original Story for Wellman and Carson. Wellman's copy of the script, acquired from his secretary, is numbered to 127 pages, though some numbers are skipped and others labeled "A," printed on various colored paper representing revisions and with a number of pages with pencil annotations by him. It also credits Carson for the screen play in addition to Parker and Cunningham. Parker's copy, acquired from her estate and with her last name in pencil at the top corner of the front cover, contains only the first 27 pages, plus a loose unnumbered page, and does not credit Carson on the cover. It differs quite a bit from Wellman's right from the beginning using a rabbit instead of a wolf in the opening scene and having the first scene take place in a movie theater instead of Esther's home. Parker's contribution to the finished script has long been a question. When she first saw the film, Parker was proud of her contribution and boasted about both the script and the film, but in later life she believed that she had contributed nothing of significance. The discovery of this script goes some way towards answering that question.

A STAR IS BORN, the quintessential Hollywood story, was filmed from October to December 1936 and premiered in April 1937. Wellman's script has December pages included. In addition to the Oscar for Best Original Story, the film also received an honorary Academy Award for color photography. It was the first color film to be nominated for best picture. A STAR IS BORN has been remade three times, in 1954 with Judy Garland and James Mason, in 1976 with Barbra Streisand and Kris Kristofferson, and most recently and notably in 2018 with Lady Gaga and Bradley Cooper.

All books subject to prior sale. Payment with order; institutions may be billed. Postage additional: $11.00 for the first book, $6.00 each thereafter. Overseas postage billed at approximate cost. Pennsylvania residents must add 6% sales tax. Mastercard, Visa, and American Express accepted. We are also open to reasonable payment terms. A book may be returned within 7 days of receipt for any reason provided it is in the same condition as sent and prior notice is given. Please insure returns for their full value.

Seller rating:
This seller has earned a 5 of 5 Stars rating from Biblio customers.
Biblio.co.uk member since 2003
Fleetwood, Pennsylvania
Ask Seller a Question

We carry a diverse and select stock with major specialties including Modern and 19th Century Literary First Editions, Signed Books & Autographs (especially Presidential and Literary), and Limited Editions Club books. We have been in business since 1987 and are proud to be members of the Antiquarian Booksellers Association of America (ABAA) and the International League of Antiquarian Booksellers (ILAB).

verso
The page bound on the left side of a book, opposite to the recto page.
First Edition
In book collecting, the first edition is the earliest published form of a book. A book may have more than one first edition in... [more]
quarto
The term quarto is used to describe a page or book size. A printed sheet is made with four pages of text on each side, and the... [more]