Join us June 2–June 4, 2022 for our second virtual antiquarian book fair!
Preregister now for Biblio.live and get $10 to use at the fair.
home Captain Ahab's Rare Books SOLO FACES - PUBLISHER'S LONG GALLEYS, INSCRIBED 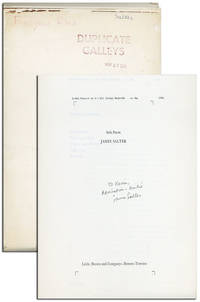 Boston: Little, Brown and Company, 1979. First Edition. Galley's for Salter's fifth novel, which originated as a screenplay he wrote for Robert Redford in 1976. The mountain climbing piece, based on the exploits of maverick American climber Gary Hemming, was one Salter spent over a year researching. "He took up climbing, scaling rock walls, bivouacking on ledges, in the Rockies and the Alps, with Royal Robbins and others. When he turned in the script to Redford, he felt it was his best. "I'll be crushingly disapponted if it's not cherished," he wrote in a letter to a friend. But Redford thought that the hero was too taciturn for the screen. A friend, Robert Ginna, then the editor-in-chief at Little, Brown, suggested that Salter turn it into a novel, which Ginna published, in 1979. Solo Faces met with modest success, and is highly regarded by alpinists for its authentic depiction of climbing" (Paumgarten, Nick. "The Last Book." The New Yorker, April 15, 2013). The galley's bear a handful of textual changes from the published version on pp.10, 13-14, and 83-84. Rita, the recipient of the inscription, is the publisher at Raven Editions, who produced Salter's Bangkok (2004), along with works by Raymond Carver, Andre Dubus, Richard Ford, and others. An exceedingly uncommon format, seldom found for any of Salter's early books. Publisher's unbound long galley sheets (19cm x 61cm), folded in half, with "DUPLICATE GALLEYS / NOV 29 1978" rubber-stamped on verso of terminal leaf, and holograph notations "For your files" and "Salter" in red pencil and blue ink above same ; 84 leaves. Inscribed by the author to fine press publisher Kevin Rita (Raven Editions): "To Kevin / Admiration, AmitiÃ© / James Salter." Light wear and handling, a few tiny tears and attendant creases to upper and lower text edges, with some subtle toning and faint, scattered staining along upper edge of terminal leaves; final leaf a bit tattered (but still holding) along center fold, with some loss to paper, but with no loss to text; Very Good+. Housed in a custom clamshell case and chemise.

Seller rating:
This seller has earned a 5 of 5 Stars rating from Biblio customers.
Biblio.co.uk member since 2010
Stephenson, Virginia
Ask Seller a Question

leaves
Very generally, "leaves" refers to the pages of a book, as in the common phrase, "loose-leaf pages." A leaf is a single sheet... [more]
Galleys
A pre-publication state of a book. A galley proof edition has already undergone all basic edits for content and corrections, but... [more]
First Edition
In book collecting, the first edition is the earliest published form of a book. A book may have more than one first edition in... [more]
good+
A term used to denote a condition a slight grade better than Good.
New
A new book is a book previously not circulated to a buyer. Although a new book is typically free of any faults or defects, "new"... [more]
Unbound
A book or pamphlet which does not have a covering binding, sometimes by original design, sometimes used to describe a book in... [more]
inscribed
When a book is described as being inscribed, it indicates that a short note written by the author or a previous owner has been... [more]
edges
The collective of the top, fore and bottom edges of the text block of the book, being that part of the edges of the pages of a... [more]
verso
The page bound on the left side of a book, opposite to the recto page.
fine
A book in fine condition exhibits no flaws. A fine condition book closely approaches As New condition, but may lack the... [more]