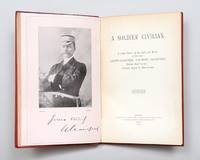 A Soldier Civilian.: A brief Sketch of the Life and Work of the late Lieut.-Colonel Gilbert Gaisford, Indian Staff Corps; Political Agent in Biluchistan.

London: Printed by the Army and Navy Co-Operative Society, Ltd,, 1900. Octavo. Original red cloth, gilt-lettered front cover, floral-patterned endpapers. Half-tone portrait frontispiece of Gaisford by Bremner, printed on pale pink paper. Spine dulled, a little wear to extremities, frontispiece just lifting away from title page where attached, title page slightly creased. A very good copy. First and sole edition of this rare memoir of a model frontier officer; an online search of institutional libraries locates one copy only, at the British Library; inscribed on the frontispiece recto, "M. Hodson with love from M. D. Spence, in memory of her friend G. Gaisford. Simla. Augu. 1900". Gaisford (1849-1898) was born in India, the son of a major in the Indian Artillery. He was educated at Sherborne "and with Army tutors" and joined the 96th Foot in India, transferring to the 5th Punjab Infantry, taking part in the Jowaki Expedition of 1877-8, where Gaisford acquitted himself "in a very dashing manner". In August 1879 he was selected to become the first officer commanding the Khyber Jezailchis (the forerunner of the Khyber Rifles). Gaisford's tenure was short but outstanding, his "intimate knowledge of the people and their language (Pashto) enabled him to manage the [Khyber] Pass very successfully". In October 1882 he rejoined the 5th Punjabis at Dara Ismail Khan. The following spring he was selected assistant superintendent of levies and ex-officio assistant political officer in the Thal Chotiali district, where he spent "the greater part of his time in visiting villages and seeing everything for himself. He was fearless to the point of rashness, and his energy and ubiquity led to his obtaining great influence over these wild tribes  He planted an orchard at Duki, and studded it with fruit and other trees  He established water mills on an improved system  He improved the old tracks and made new roads from Duki to many villages, important either as military posts or agricultural centres  His mastery of the Pashto language which he understood and spoke with perfect ease, his free intercourse with the people of the country, and his methods of speedy justice endeared him to Pathans". Returning to active duty in 1884, he was with the Zhob expedition of 1884 and again commended for his energy, described by his commanding officer, Sir Robert Sandeman, as "an excellent frontier officer". In 1889 Gaisford assumed charge of the Quetta-Pishin District and in 1895 that of the Bhopawar Agency, before returning to the Thal Chotiali in March 1896, playing a prominent role in both agricultural and educational improvement. However, on 15 March 1898 Gaisford was killed, stabbed to death by a ghazi at Smallan, Baluchistan.

inscribed
When a book is described as being inscribed, it indicates that a short note written by the author or a previous owner has...[more]
New
A new book is a book previously not circulated to a buyer. Although a new book is typically free of any faults or defects,...[more]
Cloth
"Cloth-bound" generally refers to a hardcover book with cloth covering the outside of the book covers. The cloth is stretched...[more]
title page
A page at the front of a book which may contain the title of the book, any subtitles, the authors, contributors, editors, the...[more]
G
Good describes the average used and worn book that has all pages or leaves present. Any defects must be noted. (as defined...[more]
recto
The page on the right side of a book, with the term Verso used to describe the page on the left side.
spine
The outer portion of a book which covers the actual binding. The spine usually faces outward when a book is placed on a shelf....[more]
octavo
Another of the terms referring to page or book size, octavo refers to a standard printer's sheet folded four times, producing...[more]