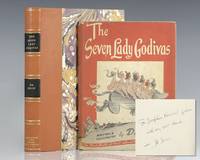 New York: Random House, 1939. First edition, first printing of this classic Dr. Seuss title. Quarto, original cloth, pictorial endpapers, illustrated throughout. Association copy, inscribed by the author opposite the title page, "For Josephine Kimball Godiva with very best thanks - Dr. Seuss." The recipient, Josephine Dodge Kimball co-founded the first book store to specialize in children's literature, Young Books, on Madison Avenue in 1929 with former Bryn Mawr classmate Joan Whitney Payson. Both women were from prominent families and had connections that brought the store instant fame. The store's opening brought headlines in the New York Times, Life and the Saturday Review of Literature and Kimball's expertly curated selection of children's books, art, and toys were often featured in the "On and Off the Avenue" shopping column of the New Yorker. In 1931, Time reported that Kimball and Payson presented an autograph manuscript signed by Albert Einstein to Yale University, an acquisition made through one of the ladies' patrons and, by 1944, the store had expanded to include a gallery, rare book room, and adult book department. Kimball also soon contributed reviews of children's books to Harper's and Scribner's including a column in the December 1937 issue of Scribner's Magazine praising Geisel's first book And to Think That I Saw It on Mulberry Street. The publication of the present volume coincided with the tenth anniversary of the grand opening of Young Books. Kimball celebrated both with an exclusive cocktail party during which the present volume was most likely inscribed to her by Giesel. In addition to Geisel, the party also included guests such as Ludwig Bemelmans and Clement Hurd, original drawings by whom were hung in the gallery and their new books displayed in the shop's window (Kahn, 93; Kimball, 62; Long, 93). Near fine in the original dust jacket which is in very good condition with small chips to the crown and foot of the spine. With the original accompanying Random House book mark laid in. Housed in a custom half morocco clamshell box. Next to the dedication copy, the finest association copy available. "Referring to his recent children's books and advertisements for Flit and Essomarine, Seuss explained that The Seven Lady Godivas was written 'to escape the monotony of writing about nothing but men folks and children, dragons or fish' In his college studies of Tennyson, Seuss may well have come across the 1842 poem 'Godiva.' During his time in England after Dartmouth, he no doubt came across the legend again. The theme of the Lady Godiva story-championing the rights of the common man-is what links this 'adult' book to his 'children's' stories and his political cartoons" (Cohen, 195).

The Seven Lady Godivas: The True Facts Concerning History's Barest Family is a picture book of the tale of Lady Godiva, written and illustrated by Dr. Seuss. One of Seuss's few books written for adults, its original 1939 publication by Random House was a failure and was eventually remaindered. However, it later gained popularity as Seuss himself grew in fame, and was republished in 1987.

Cloth
"Cloth-bound" generally refers to a hardcover book with cloth covering the outside of the book covers. The cloth is stretched...[more]
First Edition
In book collecting, the first edition is the earliest published form of a book. A book may have more than one first edition in...[more]
inscribed
When a book is described as being inscribed, it indicates that a short note written by the author or a previous owner has...[more]
clamshell box
A protective box designed for storing and preserving a bound book or loose sheets. A clamshell box is hinged on one side, with...[more]
dedication copy
...[more]
spine
The outer portion of a book which covers the actual binding. The spine usually faces outward when a book is placed on a shelf....[more]
morocco
Morocco is a style of leather book binding that is usually made with goatskin, as it is durable and easy to dye. (see also...[more]
title page
A page at the front of a book which may contain the title of the book, any subtitles, the authors, contributors, editors, the...[more]
quarto
The term quarto is used to describe a page or book size. A printed sheet is made with four pages of text on each side, and the...[more]
fine
A book in fine condition exhibits no flaws. A fine condition book closely approaches As New condition, but may lack the...[more]
jacket
Sometimes used as another term for dust jacket, a protective and often decorative wrapper, usually made of paper which wraps...[more]
Association copy
An association copy is a copy of a book which has been signed and inscribed by the author for a personal friend,...[more]