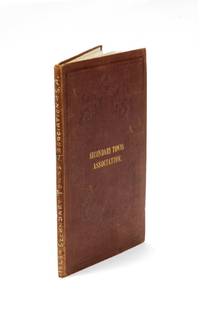 Secondary Towns Association, formed for the purchasing of one or more special survey or surveys of land in South Australia, for Sites for Secondary Towns

Secondary Towns Association, formed for the purchasing of one or more special survey or surveys of land in South Australia, for Sites for Secondary Towns

London: J. C. Hailes, 1843. Octavo, three folding plans, ALS to Thomas Burrows (1841) loosely inserted, ALS to John Burrows (1872) tipped in, contemporary ink notations on two of the folding plans and rear endpapers noting country and town acres, ownership signature of John Burrows 1855; very good in the original brown cloth, gilt, crudely lettered to spine, colonial bookplate of Charles R.J. Glover. A remarkable copy of this rare book on the second phase of South Australian settlement, sent to prospective settlers the Burrows family, and with associated material relating to their land speculations tipped in. The land holdings they took up are marked on two of the more detailed maps, and there is also an 1841 letter from a strong proponent of the various Wakefield schemes, Daniel Riddiford, having the 'pleasure to advise you, of having made the selection of your two Town acres, also one country section' in New Zealand. The book with its three fine maps is rare in its own right - Ferguson agreed with an early bookseller's note that it was "exceedingly scarce" - but to have a copy with such remarkable provenance is very exciting as a glimpse into how the early settlers were kept apprised of their prospects, not least because the Burrows family were evidently getting involved in some rather complicated empire building. On the 'Plan of the Two special surveys on the River Light' there are a series of manuscript notes relating to J. Burrows and Jane Burrows (his wife?). Similarly, the 'Plan of the Special Survey on the River Murray' has notes relating to John Burrows. Also tipped in at the end is an 1872 letter from one James Walsh to Burrows, regarding lots in the "township of Victoria". The back endpapers are covered in notes and clippings relating to land allotments. The letter from Daniel Riddiford is particularly striking. Riddiford (1814-1875) was an enthusiastic proponent of Wakefield colonisation schemes who emigrated to Wellington, New Zealand, in 1840 as agent in the New Zealand Company: 'His duties were to receive immigrants on landing and to provide temporary habitation, particularly for women and children and any sick' (Encyclopedia of New Zealand). The letter is addressed to Thomas Burrows, evidently the patriarch of the family, and therefore provides a substantive glimpse into how the early Wakefield schemes worked, noting his purchase of town lots 367 and 435, and no. 44 on the Hutt River valley ("the land in this place is rich, the timber fine..."). The note also comments that Burrows' second country selection can not yet be made because the land is not ready.

We specialise in travel & voyage books, particularly relating to the Pacific, rare printed and manuscript Australiana, illustrated books and children's literature, colour-plate books including natural history, historical maps and prints, literature and history, and early Australian paintings and voyage art. For many years Hordern House has also been a highly regarded specialist publisher, and has attracted an international reputation for its fine quality publications.

spine
The outer portion of a book which covers the actual binding. The spine usually faces outward when a book is placed on a shelf....[more]
bookplate
Highly sought after by some collectors, a book plate is an inscribed or decorative device that identifies the owner, or former...[more]
Cloth
"Cloth-bound" generally refers to a hardcover book with cloth covering the outside of the book covers. The cloth is stretched...[more]
New
A new book is a book previously not circulated to a buyer. Although a new book is typically free of any faults or defects,...[more]
octavo
Another of the terms referring to page or book size, octavo refers to a standard printer's sheet folded four times, producing...[more]
tipped in
Tipped In is used to describe something which has been glued into a book. Tipped-in items can include photos, book plates,...[more]
fine
A book in fine condition exhibits no flaws. A fine condition book closely approaches As New condition, but may lack the...[more]
gilt
The decorative application of gold or gold coloring to a portion of a book on the spine, edges of the text block, or an inlay in...[more]