Home > Hordern House Rare Books > The Sea Songs of Charles Dibdin: With a Memoir of his… 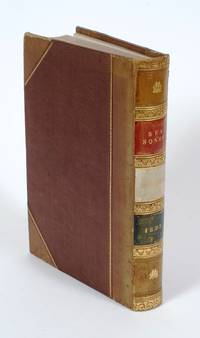 The Sea Songs of Charles Dibdin: With a Memoir of his life and Writings by William Kitchiner

The Sea Songs of Charles Dibdin: With a Memoir of his life and Writings by William Kitchiner

London: G. and W.B. Whittaker, 1823. Occasional foxing, lightly rubbed at extremities.. Tall quarto, copperplate engraved music and text;; contemporary half calf, a very handsome copy, the spine gilt and with an unusual triple "harlequin" set of labels in red, white & blue. First edition of this early collection of the patriotic ditties and rollicking shanties of the British navy: a fascinating and important record of the conditions of the Georgian sailor. Many of the songs had a lasting influence on the spirit of the navy, especially during the protracted war with France. Each is present in an engraved musical score with lyrics. The collection was authored by the prolific Charles Dibdin (1745-1815). His son Thomas, in a brief biographical notice appended to the 1850 collective edition of his father's sea-songs, remarked: 'These songs have been the solace of sailors in long voyages, in storms, in battles; and they have been quoted in mutinies to the restoration of order and discipline'. Readers may be surprised to learn that many take "Grog" or trouncing the French as their theme. Bringing out his first two-act opera when he was only sixteen, Dibdin had a long career as an actor and singer, and worked briefly with David Garrick. A seemingly inexhaustible writer, he composed some one thousand songs during his career and was also a sometime playwright, self-publishing Great News or A Trip to the Antipodes in 1794. For a complete list of the dramatist-composer's published and unpublished plays, musical entertainments and compositions see E.R. Dibdin, A Dibdin Bibliography (Liverpool, 1937). Dibdin was not much of a sailor himself: in 1788 he sailed for the East Indies, but inclement weather forced the ship back to port at Torbay. He took it as a sign and returned to London. This book neatly demonstrates the difficulty of producing a book with a letterpress introduction and engraved plates throughout: several numbers are omitted from the series and, conversely, three listed songs are not included. This is, nonetheless, the standard collation of the book with ninety-five (rather than ninety-nine) songs.

We specialise in travel & voyage books, particularly relating to the Pacific, rare printed and manuscript Australiana, illustrated books and children's literature, colour-plate books including natural history, historical maps and prints, literature and history, and early Australian paintings and voyage art. For many years Hordern House has also been a highly regarded specialist publisher, and has attracted an international reputation for its fine quality publications.

quarto
The term quarto is used to describe a page or book size. A printed sheet is made with four pages of text on each side, and the...[more]
spine
The outer portion of a book which covers the actual binding. The spine usually faces outward when a book is placed on a shelf....[more]
gilt
The decorative application of gold or gold coloring to a portion of a book on the spine, edges of the text block, or an inlay in...[more]
First Edition
In book collecting, the first edition is the earliest published form of a book. A book may have more than one first edition in...[more]
calf
Calf or calf hide is a common form of leather binding.  Calf binding is naturally a light brown but there are ways to treat...[more]
G
Good describes the average used and worn book that has all pages or leaves present. Any defects must be noted. (as defined...[more]

Home > Hordern House Rare Books > The Sea Songs of Charles Dibdin: With a Memoir of his…