home Raptis Rare Books Science and Health with Key to the Scriptures. 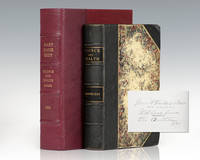 Science and Health with Key to the Scriptures.

Science and Health with Key to the Scriptures.

Boston: Published by the Author, 1886. Early printing of the central text of the Christian Science which continues to rank as a best-seller to this day. Octavo, bound in contemporary three quarters morocco over marbled boards, gilt titles and tooling to the spine, marbled endpapers, all edges marbled. Association copy, inscribed by the author on the second free endpaper in the year of publication, "Mrs. F. McNeil Potter, with love from the Author, 1886." The recipient, Frances Maria McNeil Potter was the niece of President Franklin Pierce and his sometimes hostess in the White house, assisting First Lady Jane Pierce after the death of the president's son Benny. In the winter of 1882, Mary Baker Eddy visited Washington, where "Mrs. Potter caller on [her] several times and showed considerable interest in Christian Science. Together they drove to the Botanical Gardens, the Smithsonian Institution, and the Congressional Cemetery where they knelt at the grave of General John McNeil, Mrs. Potter's father and the cousin of Mrs. Eddy's grandmother, Maryann McNeil Moore" (Peel, Mary Baker Eddy: The Years of Discovery). Potter and Eddy's correspondence continued until Potter's death and Potter remained one of Eddy's biggest supporters when many distanced themselves from the religious leader and the founding of the Church of Christ, Scientist. In very good condition. Housed in a custom half morocco clamshell box. Books signed and inscribed by Mary Baker Eddy are rare. A chronic invalid, without visible means of support, [Mary Baker Eddy] was thrown on the charity of her family...In 1862 her search for health led her to consult Dr. Phineas Parkhurst Quimby of Portland, Maine, a faith healer. She became a disciple of Quimby's methods and with one of his manuscripts as a text, began teaching his system of healing...Gradually her own methods superceded Quimby's. During this time she was at work on the manuscript of 'Science and Health.' Several attempts to find a publisher failed and it was finally brought out in an edition of one thousand copies, the cost of which was paid by two of her students. The essence of Eddy's philosophy is that the Eternal Mind is the source of all being, that the duality of mind and matter is an error. There is no matter and hence, 'disease is caused by the mind alone.' Science is the wisdom of the Eternal Mind as revealed through Jesus Christ: hence 'Christian Science.' What began as a system of faith healing had by now evolved into a religious philosophy. Mary Baker Eddy was far ahead of her time in the emphasis she placed upon positive thinking, a force which modern psychology was belated in recognizing. The movement which has grown out of her teaching has had an influence on the world far beyond the size of its membership" (PMM).

clamshell box
A protective box designed for storing and preserving a bound book or loose sheets. A clamshell box is hinged on one side, with... [more]
octavo
Another of the terms referring to page or book size, octavo refers to a standard printer's sheet folded four times, producing... [more]
inscribed
When a book is described as being inscribed, it indicates that a short note written by the author or a previous owner has been... [more]
Marbled boards
... [more]
spine
The outer portion of a book which covers the actual binding. The spine usually faces outward when a book is placed on a shelf.... [more]
gilt
The decorative application of gold or gold coloring to a portion of a book on the spine, edges of the text block, or an inlay in... [more]
edges
The collective of the top, fore and bottom edges of the text block of the book, being that part of the edges of the pages of a... [more]
Association copy
An association copy is a copy of a book which has been signed and inscribed by the author for a personal friend, colleague, or... [more]
morocco
Morocco is a style of leather book binding that is usually made with goatskin, as it is durable and easy to dye. (see also... [more]