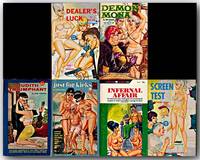 14 day return guarantee, with full refund including original shipping costs for up to 14 days after delivery if an item arrives misdescribed or damaged.

Seller rating:
This seller has earned a 5 of 5 Stars rating from Biblio customers.
Biblio.co.uk member since: 2019
Parkville, Maryland
Ask Seller a Question

remainder
Book(s) which are sold at a very deep discount to alleviate publisher overstock. Often, though not always, they have a remainder...[more]
12mo
A duodecimo is a book approximately 7 by 4.5 inches in size, or similar in size to a contemporary mass market paperback....[more]
wrappers
The paper covering on the outside of a paperback.  Also see the entry for pictorial wraps, color illustrated coverings for...[more]
rubbing
Abrasion or wear to the surface. Usually used in reference to a book's boards or dust-jacket.

More books like this are on sale from Well-Stacked Books at 35% off!