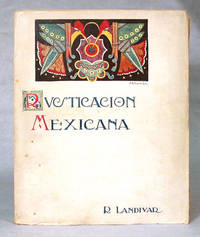 Sociedad de Edicion y Libreria Franco Americana, Mexico City, 1924; First Edition; large 8vo, 311 pages; printed on laid paper; color illustrated stiff wraps. Called one of Latin America’s greatest descriptive poems, Rusticacion Mexicana describes in detail the flora and fauna, industries, mining, agriculture, cattle raising, and pastimes of eighteenth century New Spain. Its author, Rafael Landivar, born 1731, traveled to Mexico City from Guatemala in 1749, becoming a Jesuit priest and teaching rhetoric at Puebla and Tepoztlan. When the Jesuits were expelled from Latin America in 1767, Landivar was exiled to Italy where Rusticacion was written, in Latin, and published in Modena in 1781. The Dictionary of Mexican Literature has called it "a grandiose hymn to America, [which] exudes a nostalgic love for the lost fatherland." Translation into Spanish by Francisco Loureda from the second edition of Bologna, 1782, with the original Latin on the facing pages. Very Good Plus, edges untrimmed, pages unopened, in the original publisher’s illustrated wraps, no chips or tears. Pages fresh and supple, not brittle. Clean, crisp, and bright, binding tight, sound, and square, no ownership signatures or any other markings of any kind.

All first editions are also first printings unless otherwise stated. All items guaranteed. Domestic and international shipping rates shown are based on a weight of 2.2 lbs. For heavier items we may contact you to let you know that extra shipping is required. California residents add 8.5% sales tax. Provided we receive prior notice, books may be returned for any reason within 10 days of receipt for a full refund, including shipping, as long as they are in the same condition as when originally sent.

Seller rating:
This seller has earned a 5 of 5 Stars rating from Biblio customers.
Biblio.co.uk member since: 2015
Van Nuys, California
Ask Seller a Question

New
A new book is a book previously not circulated to a buyer. Although a new book is typically free of any faults or defects,...[more]
tight
Used to mean that the binding of a book has not been overly loosened by frequent use.
crisp
A term often used to indicate a book's new-like condition. Indicates that the hinges are not loosened. A book described as crisp...[more]
edges
The collective of the top, fore and bottom edges of the text block of the book, being that part of the edges of the pages of a...[more]
unopened
A state in which all or some of the pages of a book have not been separated from the adjacent pages, caused by a traditional...[more]