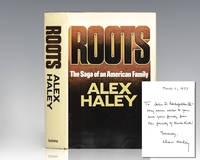 Garden City, NY: Doubleday & Company, Inc, 1976. First edition of Haley's classic work. Octavo, original half cloth. Presentation copy, inscribed by the author on the front free endpaper, "March 11, 1977 To John Rockefeller III- very warm wishes to you and your family from one family of Kunta Kinte! Alex Haley. The recipient John Rockefeller III was a philanthropist and third-generation member of the Rockefeller family. He was the eldest son of the philanthropists John D. Rockefeller Jr. and Abby Aldrich Rockefeller. Like his sister Abby, John III eventually settled on philanthropy as his major interest. His brothers Nelson and Winthrop devoted themselves to politics while Laurance went into conservation and David went into banking. He was a major force behind the establishment of the Council on Foundations, the Foundation Center and Independent Sector. He took a leading role in organizing the Commission on Foundations and Private Philanthropy (better known as the Peterson Commission) and the Commission on Private Philanthropy and Public Needs (better known as the Filer Commission). Near fine in a near fine dust jacket. Jacket design by Al Nagy. Published in October 1976 amid significant advance expectations, Roots was immediately successful, garnering a slew of positive reviews and debuting at #5 of The New York Times Best Seller list. By mid-November, it had risen to the #1 spot on the list. The television adaptation of the book aired in January 1977 and within seven months of its release, Roots had sold over 1.5 million copies. In total, Roots spent 22 weeks at the #1 spot on The Times' list, including each of the first 18 weeks of 1977. Ultimately, it was on the list for a total 46 weeks. Together, the success of the novel and its 1977 television adaptation, sparked an explosion of interest in the fields of genealogy and researching family histories. Haley earned a Pulitzer Prize special award in 1977 for Roots. The television miniseries garnered many awards, including nine Emmys and a Peabody. It was remade again in 2016 starring Malachi Kirby, Forest Whitaker, Anna Paquin, Laurence Fishburne and Jonathan Rhys Meyers.

jacket
Sometimes used as another term for dust jacket, a protective and often decorative wrapper, usually made of paper which wraps...[more]
New
A new book is a book previously not circulated to a buyer. Although a new book is typically free of any faults or defects,...[more]
fine
A book in fine condition exhibits no flaws. A fine condition book closely approaches As New condition, but may lack the...[more]
inscribed
When a book is described as being inscribed, it indicates that a short note written by the author or a previous owner has...[more]
octavo
Another of the terms referring to page or book size, octavo refers to a standard printer's sheet folded four times, producing...[more]
A.N.
The book is pristine and free of any defects, in the same condition as ...[more]
First Edition
In book collecting, the first edition is the earliest published form of a book. A book may have more than one first edition in...[more]