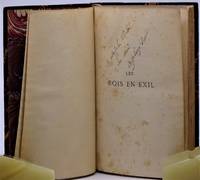 Paris: E. Dentu and Alphonse Lemerre , 1879. "Les Femmes D'Artistes" , Alphonse Lemerre, Paris, 1874 and "Les Rois En Exil. Roman Parisien", E Dentu, Paris, 1879, both books SIGNED AND INSCRIBED BY AUTHOR at 3rd front end page and half-title respectively, to the French playwright and novelist Adolphe Belot, author of the wildly popular " Mademoiselle Giraud, My Wife" in 1870 and co-author and collaborator with Daudet on the play "Sapho" in 1885 and who adapted Daudet's "Fromont Jeune et Risler Aîné" for the theater in 1876 "Les Rois en Exil" is SIGNED AND INSCRIBED "Adolphe Belot lou ami Alphonse Daudet" and "Les Femmes D'Artistes" is SIGNED AND INSCRIBED "A La femme de feu Les Femmes des Artistes". Belot's novel "La femme de feu" was published in 1872. Both books Near Fine, bound in contemporary half crushed brown morocco over marbled boards, marbled end pages, the bookplate of Whitelaw Reid front paste downs both books, both with light shelfwear and small rubs at corners. Whitelaw Reid, (1837 - 1912), was an American journalist, diplomat, and politician, successor to Horace Greeley in 1872 as editor in chief (until 1905) and publisher (until his death) of the New York Tribune, which, during much of that period, was perhaps the most influential newspaper in the United States. He was minister to France from 1889 to 1892, unsuccessful candidate for vice president on the Republican ticket with Benjamin Harrison in 1892, and ambassador to Great Britain from 1905 to 1912. (Encyclopaedia Britannica) A marvelous pair of significant Association Copies, and with a quite fascinating provenance to boot. . SIGNED AND INSCRIBED BY AUTHOR. First Edition. Half Morocco. Near Fine/No Jacket, As Issued. 8vo - over 7¾" - 9¾" tall. Association Copy.

Any book is returnable for any reason within 10 days for a complete refund, as long as it is returned in the same condition as when received. Please notify in advance of return. I accept checks, money orders, Mastercard, Visa, and bank wire transfer.

Seller rating:
This seller has earned a 5 of 5 Stars rating from Biblio customers.
Biblio.co.uk member since 2006
Bloomington, Indiana
Ask Seller a Question

Online bookseller specializing in rare and collectible books in all fields. Books bought and sold from single item to entire collection.

First Edition
In book collecting, the first edition is the earliest published form of a book. A book may have more than one first edition in... [more]
fine
A book in fine condition exhibits no flaws. A fine condition book closely approaches As New condition, but may lack the... [more]
jacket
Sometimes used as another term for dust jacket, a protective and often decorative wrapper, usually made of paper which wraps... [more]
shelfwear
Minor wear resulting from a book being place on, and taken from a bookshelf, especially along the bottom edge.
morocco
Morocco is a style of leather book binding that is usually made with goatskin, as it is durable and easy to dye. (see also... [more]
bookplate
Highly sought after by some collectors, a book plate is an inscribed or decorative device that identifies the owner, or former... [more]
inscribed
When a book is described as being inscribed, it indicates that a short note written by the author or a previous owner has been... [more]
Marbled boards
... [more]
Association copy
An association copy is a copy of a book which has been signed and inscribed by the author for a personal friend, colleague, or... [more]
New
A new book is a book previously not circulated to a buyer. Although a new book is typically free of any faults or defects, "new"... [more]