Home Les Enluminures Printed Book of Hours (Use of Rome); in Latin and French, imprint on parchment 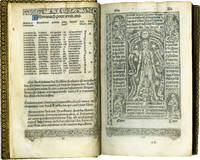 Printed Book of Hours (Use of Rome); in Latin and French, imprint on parchment

Printed Book of Hours (Use of Rome); in Latin and French, imprint on parchment

UNRECORDED BOOK OF HOURS PRINTED FOR THE FAMED PARISIAN BOOKSELLER AND PUBLISHER, ANTHOINE VÃ‰RARD. In Latin and French, imprint on parchment, France, Paris, Anthoine VÃ©rard, August 22, 1506. Dimensions 180 x 108 mm., 126 folios, complete, red ink ruling added by hand throughout, up to 22 lines of gothic type (bastarda), one- to two-line gold initials on alternately brick red and blue grounds added by hand throughout, 28 SMALL WOOD- AND METALCUTS, 17 LARGE WOOD- AND METALCUTS about two lines of text, figurative wood- and metalcut borders. BINDING: Bound in 19th-century brown leather by Chambolle-Duru, spine with five raised bands and title in gold, "Livre/ D'Heures," gilt edges. TEXT AND ILLUSTRATION: Extremely rare imprint, known only in this copy, of an unrecorded Book of Hours printed for Anthoine VÃ©rard. The illustrations here are based on designs by the Master of the TrÃ¨s Petites Heures of Anne of Brittany made for VÃ©rard (and based on series made for Vostre). This copy is uncolored, allowing the details of the illustrations to be observed. PROVENANCE: The manuscript was first printed in Paris for Anthoine VÃ©rard (active 1485-1512) on August 22, 1506. Verard, a famed Parisian bookseller and publisher, was known for his luxurious illuminated printed volumes, produced for illustrious patrons including Kings Charles VIII and Louis XII of France, and King Henry VII of England. There is a short note on f. 12, dated 1585, recording a baptism and other family events. In the second half of the 19th century, the manuscript belonged to E. DÃ©licourt. Later, the manuscript belonged to Richard de LomÃ©nie (his armorial bookplate inside front cover, with his name and motto, "Je matiendrais") in the 20th century. On the front flyleaves, there are pencil notes in French describing the book and its collation. CONDITION: Good condition, painted initials rubbed on ff. 2v, 86v and 103v, f. 1 stained and occasional minor stains thereafter, some cockling, a few leaves creased, binding in excellent condition. Full description and images available. (BOH 152/TM 1080)

raised band(s)
Raised bands refer to the ridges that protrude slightly from the spine on leather bound books. The bands are created in the... [More]
Parchment
Pages or book covering made from a prepared animal skin. Parchment describes any animal skin used for books, while vellum is a... [More]
A.N.
The book is pristine and free of any defects, in the same condition as ... [More]
edges
The collective of the top, fore and bottom edges of the text block of the book, being that part of the edges of the pages of a... [More]
leaves
Very generally, "leaves" refers to the pages of a book, as in the common phrase, "loose-leaf pages." A leaf is a single sheet... [More]
gilt
The decorative application of gold or gold coloring to a portion of a book on the spine, edges of the text block, or an inlay in... [More]
spine
The outer portion of a book which covers the actual binding. The spine usually faces outward when a book is placed on a shelf.... [More]
bookplate
Highly sought after by some collectors, a book plate is an inscribed or decorative device that identifies the owner, or former... [More]