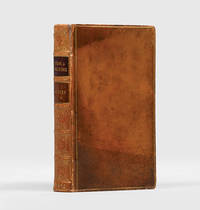 London: Richard Bentley,, 1833. Octavo (165 x 101 mm). Contemporary light brown calf, titles in gilt to dark red and dark brown calf spine labels, spine tooled in gilt and blind, gilt ruling to boards, blind tooling to turn-ins, marbeld edges and endpapers. Engraved vignette title and frontispiece by William Greatbach after Ferninand Pickering (tissue-guards intact). Booklabel of "Downs" to front pastedown. Sometime expertly restored, small chip to spine head, a little wear to extremities, front joint starting at top, hinges tender, internally clean and notably unfoxed. A very good copy. First Bentley edition, the fourth edition overall, and the first English edition to be illustrated. In 1832-3 Richard Bentley bought the copyright to all Austen's novels, which had not been reissued since 1818, to include them in his Standard Novels series, of which this is no. XXX. The Bentley illustrations, by the obscure Ferdinand Pickering, played an integral part in the reception of Austen's novels; according to one Austen scholar, they "promoted a sense that her novels were best understood as familial, female focused, and sensational. For decades, these illustrations would have served to steer readers away from the conclusion that Austen's fiction ought to be understood as social, comic, or didactic" (Looser). Gilson D5; Davoney Looser, The Making of Jane Austen, 2017, p. 20.

Pride and Prejudice is a novel by Jane Austen. First published on 28 January 1813, it was her second published novel. Its manuscript was initially written between 1796 and 1797 in Steventon, Hampshire, where Austen lived in the rectory. Originally called First Impressions, it was never published under that title, and in following revisions it was retitled Pride and Prejudice.

this is my #1 favorite book of all the Jane Austen books. i love the way elizabeth and darcy talk to each other.

Pride and Prejudice by Jane Austen is listed by many as a universal Classic and, rightfully, frequents many “Must Read” lists.

Elizabeth Bennett lives in a small country estate. Daughter to a poor country gentleman who has four other daughters, her prospects of marriage are slim. That doesn’t bother Elizabeth, however. She is beautiful, smart, opinionated, strong-willed and in no hurry to find a husband. Her mother, who frequently embarrasses her and her older sister Jane by pushing them at any eligible bachelor, has other plans for her. While at a public ball, she is introduced to mild-mannered pleasant Mr. Bingley who is taken by Jane instantly. Also in attendance is Mr. Bingley’s best friend Mr. Darcy. Mr. Darcy is handsome and rich but gives the impression of distaste when introduced to Elizabeth. Throughout the story, they constantly misunderstand and miss-judge each other making many nearly grievous mistakes.

If you are anything like me, you will be just as frustrated with Elizabeth as she learns Mr. Darcy’s true character and how to let go of her objections to love and simply fall.

This is truly my all-time favorite book so far. I read it at least once a year, usually around Christmastime. Given that Austen’s writing describes this time-period so intricately, I can picture myself as Elizabeth Bennett every time I read it. And, just like Elizabeth Bennett, I fall in love with Mr. Darcy every time as well.

octavo
Another of the terms referring to page or book size, octavo refers to a standard printer's sheet folded four times, producing...[more]
edges
The collective of the top, fore and bottom edges of the text block of the book, being that part of the edges of the pages of a...[more]
calf
Calf or calf hide is a common form of leather binding.  Calf binding is naturally a light brown but there are ways to treat...[more]
gilt
The decorative application of gold or gold coloring to a portion of a book on the spine, edges of the text block, or an inlay in...[more]
vignette
A decorative design or illustration placed at the beginning or end of a ...[more]
spine
The outer portion of a book which covers the actual binding. The spine usually faces outward when a book is placed on a shelf....[more]