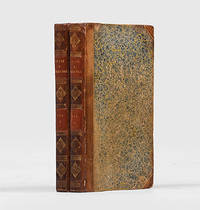 Pride and Prejudice.: A Novel. In Two Volumes. By the Author of "Sense and Sensibility," &c. Third Edition.

London: printed for T. Egerton,, 1817. An attractive copy in a contemporary binding 2 volumes, duodecimo (179 x 103 mm). Contemporary half calf, twin labels to spines to style, compartments decorated in gilt, marbled sides ruled in gilt. Bound without half-titles or terminal blanks. Early initials faintly inked to title pages. Head of spine of vol. I restored to style, joints neatly repaired, sides a little scuffed, tips furbished, contents slightly foxed, vol. I front hinge cracked but holding (visible at B2), text block sound, puncture to vol. I B8, l. 7-8, vol. II with pale old water stain (mainly marginal) to lower fore-corners of second half of text. An attractive copy withal. Third edition, and the first to be issued in two volumes. Pride and Prejudice was Austen's second published novel. Austen began it in August 1796, when she was the same age as her heroine, and finished in August 1797. Entitled "First Impressions", it was offered by her father to Thomas Cadell on 1 November 1797 as a novel in three volumes "about the length of Miss Burney's Evelina". Cadell declined without asking to see the manuscript. Austen revised it in 1809-10 after the success of Sense and Sensibility, by which time the first choice of title had been used elsewhere. It remains the most popular of her novels. Keynes I5; Gilson A5.

Pride and Prejudice is a novel by Jane Austen. First published on 28 January 1813, it was her second published novel. Its manuscript was initially written between 1796 and 1797 in Steventon, Hampshire, where Austen lived in the rectory. Originally called First Impressions, it was never published under that title, and in following revisions it was retitled Pride and Prejudice.

this is my #1 favorite book of all the Jane Austen books. i love the way elizabeth and darcy talk to each other.

Pride and Prejudice by Jane Austen is listed by many as a universal Classic and, rightfully, frequents many “Must Read” lists.

Elizabeth Bennett lives in a small country estate. Daughter to a poor country gentleman who has four other daughters, her prospects of marriage are slim. That doesn’t bother Elizabeth, however. She is beautiful, smart, opinionated, strong-willed and in no hurry to find a husband. Her mother, who frequently embarrasses her and her older sister Jane by pushing them at any eligible bachelor, has other plans for her. While at a public ball, she is introduced to mild-mannered pleasant Mr. Bingley who is taken by Jane instantly. Also in attendance is Mr. Bingley’s best friend Mr. Darcy. Mr. Darcy is handsome and rich but gives the impression of distaste when introduced to Elizabeth. Throughout the story, they constantly misunderstand and miss-judge each other making many nearly grievous mistakes.

If you are anything like me, you will be just as frustrated with Elizabeth as she learns Mr. Darcy’s true character and how to let go of her objections to love and simply fall.

This is truly my all-time favorite book so far. I read it at least once a year, usually around Christmastime. Given that Austen’s writing describes this time-period so intricately, I can picture myself as Elizabeth Bennett every time I read it. And, just like Elizabeth Bennett, I fall in love with Mr. Darcy every time as well.

hinge
The portion of the book closest to the spine that allows the book to be opened and closed.
text block
Most simply the inside pages of a book.  More precisely, the block of paper formed by the cut and stacked pages of a...[more]
cracked
In reference to a hinge or a book's binding, means that the glue which holds the opposing leaves has allowed them to separate,...[more]
gilt
The decorative application of gold or gold coloring to a portion of a book on the spine, edges of the text block, or an inlay in...[more]
foxed
Foxing is the age related browning, or brown-yellowish spots, that can occur to book paper over time. When this aging process...[more]
calf
Calf or calf hide is a common form of leather binding.  Calf binding is naturally a light brown but there are ways to treat...[more]
spine
The outer portion of a book which covers the actual binding. The spine usually faces outward when a book is placed on a shelf....[more]