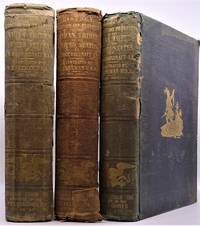 (Presentation Copy) Historical and Statistical Information, Reflecting the History, Condition, and Prospects of the Indian Tribes of the United States . Parts I, III, and IV

(Presentation Copy) Historical and Statistical Information, Reflecting the History, Condition, and Prospects of the Indian Tribes of the United States . Parts I, III, and IV

Philadelphia: Lippincott, Grambo & Company, 1851. "Collected and prepared under the direction of the Bureau of Indian Affairs, per Act of Congress of March 3d, 1847." Presentation Copies of Parts I, III, and IV only, each part a First Edition, 1851, 1853, and 1854 published by Lippincott, Grambo & Company, Philadelphia . Part I SIGNED AND INSCRIBED "Prof. George Howe with respect of H.R. Schoolcraft" at front paste down in tidy secretatial hand. Parts III and IV SIGNED AND INSCRIBED alike "Rev. George Howe with respects of H.R. Schoolcraft". George Howe (1802-1883 was an ordained minister and professor at Presbyterian Theological Seminary in Columbia, S.C. and the author of History of the Presbyterian Church in South Carolina published 1870-1883. Provenance: Part I additionally SIGNED AND INSCRIBED at front paste down "Presented to Joseph Hyde Pratt by Prof. George Howe University of North Carolina". Prof. George Howe (1876-1936) was the grandson of George Howe and was a longtime professor of Latin and the Classics at UNC. He was also the nephew of President Woodrow Wilson. Joseph Hyde Pratt (1870-1942) was State Mineralogist and State Geologist of North Carolina, a longtime professor at UNC, and a WWI hero. Parts III and IV with Pratt's ownership signature at front end page. The three volumes are complete with all plates. Part I, xviii, 13-568 p., 76 plates; Part III, xviii, 19-635 p., 45 plates, 3 of which are listed as appearing in Vol. IV; Part IV, xxvi, 19-668 p., 41 plates. A good set in unsophisticated original decorative cloth bindings, Part I with damping at fore edge margins, worn at corners, cloth at spine torn and separating from front joint, cloth chipped at head of spine. Part III cloth torn and peeling from top and bottom of spine, corners worn; Part IV rear hinge starting, corners worn, holes in cloth along top half of front joint, 1/4" loss of cloth at head of spine. Scattered toning and end papers soiled throughout the set, Presentation Copy, with distinguished provenance. of three of the first four volumes of Schoolcraft's six volume massive contribution to the history of Native Americans.. SIGNED. First Edition. Decorative Cloth. Good. Folio - over 12" - 15" tall. Presentation Copy.

Any book is returnable for any reason within 10 days for a complete refund, as long as it is returned in the same condition as when received. Please notify in advance of return. I accept checks, money orders, Mastercard, Visa, and bank wire transfer.

Seller rating:
This seller has earned a 5 of 5 Stars rating from Biblio customers.
Biblio.co.uk member since 2006
Bloomington, Indiana
Ask Seller a Question

Online bookseller specializing in rare and collectible books in all fields. Books bought and sold from single item to entire collection.

inscribed
When a book is described as being inscribed, it indicates that a short note written by the author or a previous owner has... [more]
soiled
Generally refers to minor discoloration or staining.
Cloth
"Cloth-bound" generally refers to a hardcover book with cloth covering the outside of the book covers. The cloth is stretched... [more]
hinge
The portion of the book closest to the spine that allows the book to be opened and closed.
folio
A folio usually indicates a large book size of 15" in height or larger when used in the context of a book description.... [more]
spine
The outer portion of a book which covers the actual binding. The spine usually faces outward when a book is placed on a shelf.... [more]
fore edge
The portion of a book that is opposite the spine.   That part of a book which faces the wall when shelved in a... [more]
First Edition
In book collecting, the first edition is the earliest published form of a book. A book may have more than one first edition in... [more]