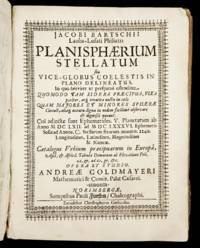 Hardcover. Fine. Edited by Andreas Goldmayer. Text in Latin (with some words and passages in Greek and German). Illustrated with 9 engraved plates: 3 large fold-out star maps, and six other engraved astronomical plates (of which 3 are double-page); plus a superb extra engraved title by Matthias van Somer, as well as a few woodcut diagrams in text. 4to. Contemporary limp vellum, with manuscript title to spine and to bottom edge of the text block. Nuremberg, Printed by Christoph Gerhard for Paul Fürst (1661). First Edition. (The date is conjectured based on the starting point of the planetary tables, and the use of 1661 in the example on the last page.)

The first collected edition of Planispherium stellatum, published posthumously, contains Bartschs 3 important folding star maps with the accompanying explanatory text. Also included are a complete cosmographical handbook with 23 worked problems for the student; a perpetual solar ephemeris by Lorenz Eichstaedt; a planetary ephemeris for 25 years from 1662; a catalogue of 1240 fixed stars, based on Brahe, Kepler and Severinus; a catalogue of European cities with their coordinates, tables of right and oblique ascensions; and a table of polar elevations for Nuremberg by Cyprian Leowitz. Jakob Bartsch, a noted German mathematician, astronomer and physician, was born in Silesia. In 1626-7 he worked in Augsburg with Julius Schiller and supervised the publication of his atlas after Schillers death. Bartsch married Johann Keplers daughter Susanna in 1630. He also assisted Kepler in his work during his later years; in particular he is known to have helped Kepler with the calculations for his celebrated Rudolphine Tables. After Keplers death, together with Keplers son, Ludwig Kepler, Bartsch took over the editing and preparing for publication of Keplers Somnium, a fantasy novel originally written in 1608, and considered the first serious scientific treatise on lunar astronomy (Carl Sagan and Isaac Asimov have also called it the first work of science fiction).

Vellum binding slightly soiled and rubbed; hinges somewhat shaken but holding; first and last leaf with partial separation at gutter. Some light marginal water staining. As typical for this edition there is persistent browning to the text block, due to the quality of paper, but with all the text perfectly legible throughout, and with most plates only lightly browned. Folding plates neatly bound on later paper guards, with a few minor closed tears at folds. O/w a solid, well-margined copy, in contemporary binding, complete with the rarely present final leaf and the instructions for the bookbinder in German.

30 day return guarantee, with full refund including original shipping costs for up to 30 days after delivery if an item arrives misdescribed or damaged.Massachusetts residents must add 6.25 percent sales tax to remittances.

Seller rating:
This seller has earned a 5 of 5 Stars rating from Biblio customers.
Biblio.co.uk member since 2018
Great Barrington, Massachusetts
Ask Seller a Question

Early Printing, Literature and Illustrated Books.. By appointment only.

gutter
The inside margin of a book, connecting the pages to the joints near the binding.
soiled
Generally refers to minor discoloration or staining.
vellum
Vellum is a sheet of specialty prepared skin of lamb, calf, or goat kid used for binding a book or for printing and writing. ... [more]
text block
Most simply the inside pages of a book.  More precisely, the block of paper formed by the cut and stacked pages of a... [more]
o/w
An abbreviation for otherwise
fine
A book in fine condition exhibits no flaws. A fine condition book closely approaches As New condition, but may lack the... [more]
spine
The outer portion of a book which covers the actual binding. The spine usually faces outward when a book is placed on a shelf.... [more]
shaken
A hardcover in which the text block is loose, but still attached to the binding.