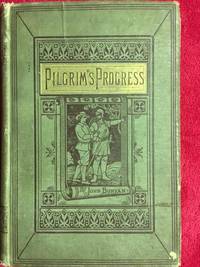 Pilgrim's Progress: From This World To That Which Is To Come Delivered under the similitude of a Dream

This book is in poor condition.The binding is loose and coming apart. The previous owners names are written on the inside front board and the first end page. The cover is worn and spotted on the edges, corners and spine. The pages inside are tanned, yellowed and torn. The last four pages of the index are loose and pinned together. The only reason I am selling this book is because it is a collector's item. This book is almost 150 years old.

The Pilgrim's Progress From This World, To That Which Is To Come, written by writer and preacher John Bunyan while in prison, is regarded as one of the most significant works of religious English literature. In the Christian allegory, the characters function as embodiments of the moral qualities in their names: Christian, Christiana, Great-heart, and Hopeful, to name a few.

Though it now appears in one volume, Nathaniel Ponder of London originally published the two parts of The Pilgrim's Progress separately, printing Part 1 in 1678 and Part II later, in 1684. Part I of the Pilgrim's Progress quickly sold out, requiring a second edition within the year. The next year, a third edition — the definitive edition of the book ­­— was printed, with revisions as well as a number of scenes added by Bunyan.

The Pilgrim's Progress from This World to That Which Is to Come is a Christian allegory written by John Bunyan and published in February, 1678. It is regarded as one of the most significant works of English literature, has been translated into more than 200 languages, and has never been out of print.

Seller rating:
This seller has earned a 5 of 5 Stars rating from Biblio customers.
Biblio.co.uk member since: 2017
Lubbock, Texas
Ask Seller a Question

spine
The outer portion of a book which covers the actual binding. The spine usually faces outward when a book is placed on a shelf....[more]
edges
The collective of the top, fore and bottom edges of the text block of the book, being that part of the edges of the pages of a...[more]
Poor
A book with significant wear and faults. A poor condition book is still a reading copy with the full text still readable. Any...[more]

More books like this are on sale from Revue & Revalued Books at 70% off!