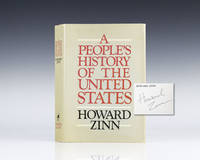 A People’s History of the United States.

A People’s History of the United States.

New York: Harper & Row, 1980. First edition of the historian's magnum opus. Thick Octavo, original cloth. Signed by Howard Zinn on the title page. Fine in a near fine dust jacket with a few small closed tears. The nicest example we have seen of this title, as most copies were read and re-read. The New York Times wrote that author "[P]rofessor Zinn writes with an enthusiasm rarely encountered in the leaden prose of academic history, and his text is studded with telling quotations from labor leaders, war resisters and fugitive slaves. There are vivid descriptions of events that are usually ignored, such as the great railroad strike of 1877 and the brutal suppression of the Philippine independence movement at the turn of this century. Professor Zinn's chapter on Vietnam - bringing to life once again the free-fire zones, secret bombings, massacres and cover-ups - should be required reading for a new generation of students now facing conscription." Howard Fast declared A People's History to be "[o]ne of the most important books I have ever read in a long life of reading...It's a wonderful, splendid book - a book that should be read by every American, student or otherwise, who wants to understand his country, its true history, and its hope for the future." Named by TIME Magazine as one of the 100 best and most influential non-fiction books since 1923.

title page
A page at the front of a book which may contain the title of the book, any subtitles, the authors, contributors, editors, the...[more]
fine
A book in fine condition exhibits no flaws. A fine condition book closely approaches As New condition, but may lack the...[more]
jacket
Sometimes used as another term for dust jacket, a protective and often decorative wrapper, usually made of paper which wraps...[more]
octavo
Another of the terms referring to page or book size, octavo refers to a standard printer's sheet folded four times, producing...[more]
Cloth
"Cloth-bound" generally refers to a hardcover book with cloth covering the outside of the book covers. The cloth is stretched...[more]
First Edition
In book collecting, the first edition is the earliest published form of a book. A book may have more than one first edition in...[more]