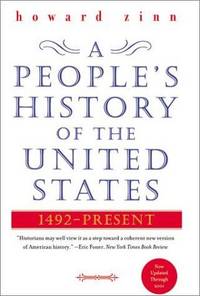 New York: Harper. Hardcover. 0060528427 No damage from past owners, not a former library book, not a remainder or book club, not clipped, Hardcover.The name and address of a past owner is rubber stamped to the inside of the front cover. This new edition contains two new chapters covering the Clinton presidency, the 2000 Election, and the "war on terrorism," continuing Zinn's important contribution to a complete and balanced understanding of American history. All books shipped within 24 hours with U.S. Postal Service Delivery Confirmation, each order is packaged in a new box with bubble wrap, and always your satisfaction is guaranteed. . Very Good. 2003.

Seller rating:
This seller has earned a 4 of 5 Stars rating from Biblio customers.
Biblio.co.uk member since: 2011
Tonopah, Nevada
Ask Seller a Question

Rare and Used books Bought and Sold. All categories.

remainder
Book(s) which are sold at a very deep discount to alleviate publisher overstock. Often, though not always, they have a remainder...[more]