Home Dons Book Store Other Altars: Roots and Realities of Cultic and Satanic… 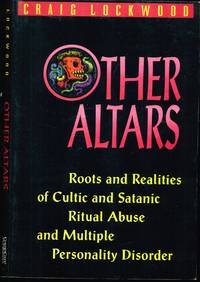 Other Altars: Roots and Realities of Cultic and Satanic Ritual Abuse and Multiple Personality Disorder

Other Altars: Roots and Realities of Cultic and Satanic Ritual Abuse and Multiple Personality Disorder

Minneapolis, Minnesota: CompCare Publications, 1993. 255 Pages plus 17 pages of Notes, References, and a List of Prosecutions. A used as new book with no defects noted and with interior text pages that are near flawless. Blood sacrifice in the name of spiritual belief is as old as humankind. Its been called by thousands of names, in thousands of languages, over thousands of years. Bound to humanity's search for spiritual knowledge and deeper meaning is our grim legacy of ritual murder. Much of religion's history has been written in blood and punctuated by the screams of the dying--dying animals, men, women, children. Today, the label ritual abuse is commonly applied to behaviors involving multioffender, multirnotive sexual abuse, torture, programmed mind control, blood sacrifice, infanticide, or cannibalism, combined with symbols and artifacts of spiritual belief. Ritual abuse, a far from precise term, is subject to increasing discussion and dispute. Call it a frightening reality, a mystery, a rumor-panic, media hype, or a socially constructed group fantasy, ritual abuse goes beyond the acts that the nouns ritual and abuse denote. Ritual abuse, as a complex set of behaviors, remains ill-defined-a subject without consensus. Ritual abuse, as a description, has become a nom de guerre, a symbolic term or pseudonym, neither fully describing the often criminal phenomenon itself nor the sometimes religious context in which it occurs. Our language needs a new word that is clinically accurate to replace ritual abuse -- a word that emphasizes the actual nature of the abuse, rather than its religious, ritualistic overtones. Ritual sacrifice is not an ancient, forgotten cultural custom. This book delves into the origins, nature, and contemporary use of such trauma-structured dissociation, a long overlooked psychological phenomenon.. First Edition. Trade Paperback. As New. 6" X 9".

Expand Your Threshold of Belief...Knowing what people have done in the past can be helpful in understanding what they are capable of doing in the present. Saying "it can't happen here" is harder to do when you know that it has already happened somewhere else. In this book, Craig Lockwood presents a historical view of human behavior in regard to the occult and its part in society, organized groups and religion. Then he applies this information to present-day reports of ritual abuse, along with brief chapters on multiple personality and the science of memory, and lets readers draw their own conclusions. Chapter 18 on the Politics of Denial goes into the human practice of denying the truth to protect other agendas. Included after Notes and References is a List of Prosecutions in which ritual abuse was involved.Not for the casual reader, this book gives a valuable historical background for the serious study of modern organized ritual abuse and the technology of control of the many by the few.(Note: I have previously published this review at Amazon.com on Sept. 19, 2005.)

We accept checks, money orders, Discover, MasterCard and Visa. Books may be returned for any reason providing a request is made within 7 days of receipt. Return shipping charges refunded if book is not as described.

Seller rating:
This seller has earned a 4 of 5 Stars rating from Biblio customers.
Biblio.co.uk member since: 2005
Albuquerque, New Mexico
Ask Seller a Question

We are a family owned and operated bookstore in same location for 49 years. We have built our business on integrity, professional and personal service. General line of new and used paperback and hardback books, comics and graphic novels.

trade paperback
Used to indicate any paperback book that is larger than a mass-market paperback and is often more similar in size to a hardcover...[more]
First Edition
In book collecting, the first edition is the earliest published form of a book. A book may have more than one first edition in...[more]
New
A new book is a book previously not circulated to a buyer. Although a new book is typically free of any faults or defects,...[more]