Home Peter Harrington On the Origin of Species by Means of Natural Selection, 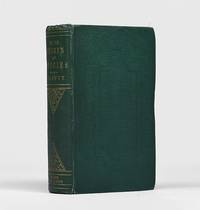 On the Origin of Species by Means of Natural Selection,

On the Origin of Species by Means of Natural Selection,: or the Preservation of Favoured Races in the Struggle for Life.

London: John Murray,, 1859. Ushering in a new era of thought about the nature of man Octavo gathered and signed in 12s. Original green diagonal-wave-grain cloth, spine lettered and decorated in gilt, covers ornamentally blocked in blind, pale brown coated endpapers, binder's ticket of Edmonds & Remnant to rear pastedown. Housed in a green cloth book-form slipcase and chemise. Folding diagram lithographed by W. West. 32-page publisher's catalogue at rear dated June 1859. Bookseller's description of a different copy tipped to front pastedown, marks of ownership as noted below. Spine slightly cocked, extremities rubbed, corners bumped, very short separation at foot of front joint, endpapers a trifle cracked at inner hinges, very lightly shaken with separation between signatures in a couple of places, a very good copy. First edition of "the most influential scientific work of the 19th century" (Horblit) and "certainly the most important biological book ever written" (Freeman), in which Darwin explained his concept of evolutionary adaptation through natural selection, which would become the foundation of modern evolutionary theory; 1,250 copies were printed. "The publication of the Origin of Species ushered in a new era in our thinking about the nature of man. The intellectual revolution it caused and the impact it had on man's concept of himself and the world were greater than those caused by the works of Copernicus, Newton, and the great physicists of more recent times  Every modern discussion of man's future, the population explosion, the struggle for existence, the purpose of man and the universe, and man's place in nature rests on Darwin" (Ernst Mayr). Provenance: George Yewdall, solicitor, Leeds (blindstamp on front free endpaper); Sir Charles Fellows, British archaeologist (armorial bookplate on rear pastedown); John Edwin Eddison, professor of veterinary medicine (signature on front free endpaper); Sturges S. Dunham (signature, 29 June 1931, on front free endpaper verso). Dibner 199; Freeman 373 (binding variant a, advertisements variant 3, no priority); Garrison-Morton 220; Horblit 23b; Norman 593; Printing and the Mind of Man 344b.

cocked
Refers to a state where the spine of a book is lightly "twisted" in such a way that the front and rear boards of a book do not...[more]
cracked
In reference to a hinge or a book's binding, means that the glue which holds the opposing leaves has allowed them to separate,...[more]
gilt
The decorative application of gold or gold coloring to a portion of a book on the spine, edges of the text block, or an inlay in...[more]
octavo
Another of the terms referring to page or book size, octavo refers to a standard printer's sheet folded four times, producing...[more]
spine
The outer portion of a book which covers the actual binding. The spine usually faces outward when a book is placed on a shelf....[more]
First Edition
In book collecting, the first edition is the earliest published form of a book. A book may have more than one first edition in...[more]
shaken
A hardcover in which the text block is loose, but still attached to the binding.
New
A new book is a book previously not circulated to a buyer. Although a new book is typically free of any faults or defects,...[more]
bookplate
Highly sought after by some collectors, a book plate is an inscribed or decorative device that identifies the owner, or former...[more]
Cloth
"Cloth-bound" generally refers to a hardcover book with cloth covering the outside of the book covers. The cloth is stretched...[more]