Home Peter Harrington Observations on the means of exciting a spirit of National Industry; chiefly intended to promote the… 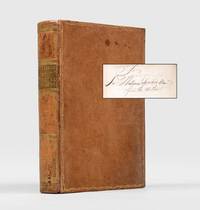 Observations on the means of exciting a spirit of National Industry; chiefly intended to promote the Agriculture, Commerce, Manufactures, and Fisheries, of Scotland.

Observations on the means of exciting a spirit of National Industry; chiefly intended to promote the Agriculture, Commerce, Manufactures, and Fisheries, of Scotland.: In a series of letters to a friend.

Edinburgh: printed for T. Cadell, London, and C. Elliot, Edinburgh,, 1777. First edition, presentation copy, inscribed "For Sir William Forbes Bart. from the Author" on the title page verso, complete with both the half-title and addenda pages (pp. 527-34), the former of which is bound in after the errata as issued. Sir William Forbes of Pitsligo (1739-1806) was an eminent Scottish banker and benefactor, and a good friend of James Boswell and, through him, Samuel Johnson. Forbes amassed a large number of highly important works and miscellanies at his library at Pitsligo. The Scottish agriculturalist and political economist James Anderson (1739-1808) wrote several influential works on rural economy as well as regular articles for his two magazines, The Bee (1790-4) and Recreations (1799-1803). He was "second to none as a development economist" (The New Palgrave I, p. 93). Observations includes one of the earliest criticisms in print of his contemporary Adam Smith's Wealth of Nations. The postscript to Letter XIII presents a prolonged argument, with sustained direct quotation, against Smith's light treatment of the importance of grain prices "to the well-being of almost every individual of the state" (p. 310): "since writing the above, I have seen the very ingenious treatise of Dr Adam Smith on the nature and causes of the wealth of nations; and am sorry to find, that I have the misfortune to differ in opinion from an author of such extensive knowledge" (p. 309). Smith never directly addressed these criticisms. In his closing statements on the topic, however, Anderson capitulated by stating that on all other matters Smith's reasoning is "just, clear, and convincing. To [Wealth of Nations] therefore I refer the curious reader for father [sic] satisfaction: - it deserves in particular the serious attention of every person who is concerned in the legislative council of the nation" (pp. 370-1). Quarto (260 x 205 mm). Contemporary speckled calf, brown morocco spine label, compartments ruled and decorated in gilt, gilt-tooled roll to boards, marbled endpapers. Bookplate of Sir William Forbes to front pastedown. Gentle rubbing to spine and extremities, a little wear to corners, front and rear leaves slightly browned from turn-ins, an excellent copy. Goldsmiths' 11528; Kress B.6.

New
A new book is a book previously not circulated to a buyer. Although a new book is typically free of any faults or defects,...[more]
First Edition
In book collecting, the first edition is the earliest published form of a book. A book may have more than one first edition in...[more]
leaves
Very generally, "leaves" refers to the pages of a book, as in the common phrase, "loose-leaf pages." A leaf is a single sheet...[more]
bookplate
Highly sought after by some collectors, a book plate is an inscribed or decorative device that identifies the owner, or former...[more]
morocco
Morocco is a style of leather book binding that is usually made with goatskin, as it is durable and easy to dye. (see also...[more]
title page
A page at the front of a book which may contain the title of the book, any subtitles, the authors, contributors, editors, the...[more]
rubbing
Abrasion or wear to the surface. Usually used in reference to a book's boards or dust-jacket.
inscribed
When a book is described as being inscribed, it indicates that a short note written by the author or a previous owner has...[more]
calf
Calf or calf hide is a common form of leather binding.  Calf binding is naturally a light brown but there are ways to treat...[more]
errata
Errata: aka Errata Slip A piece of paper either laid in to the book correcting errors found in the printed text after being...[more]
verso
The page bound on the left side of a book, opposite to the recto page.
gilt
The decorative application of gold or gold coloring to a portion of a book on the spine, edges of the text block, or an inlay in...[more]
spine label
The paper or leather descriptive tag attached to the spine of the book, most commonly providing the title and author of the...[more]
quarto
The term quarto is used to describe a page or book size. A printed sheet is made with four pages of text on each side, and the...[more]