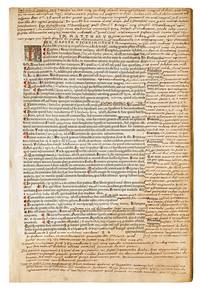 by Erasmus of Rotterdam

Basel: Johannes Froben, March 1519. The rare first edition of the enlarged annotations in a separate volume.

A scholar's copy annotated with the Hebrew learning of Sebastian Münster.
Desiderius Erasmus Roterodamus (c. 1466-1536), a Dutch humanist, Catholic priest, and scholar, was one of the most influential Renaissance figures. A professor of divinity and Greek, Erasmus wrote, taught and travelled, meeting with Europe's foremost scholars. A prolific author, Erasmus wrote on subjects of both ecclesiastic and general human interest.
The first printed New Testament in the original Greek including Erasmus's Latin translation and his annotations appeared in Basel in 1516. Erasmus had already begun revising his text during the production of that publication. Moreover, he augmented his immense scholarly annotations considerably, which resulted in the publication of the Annotationes as a separate volume to accompany the Novum Testamentum; both volumes appeared together in 1519. It was especially this edition that formed the basis of both Luther's and Tyndale's New Testament translations. The Annotationes, although listed on the title-page of Novum Testamentum, is often found separately.
Johannes Froben decorated this edition with several woodcut borders, headpieces and fine metalcut initials made by important Basel illustrators, used before in other works. Ambrosius Holbein, the older brother of Hans Holbein the younger, designed the elaborate woodcut border of the title page, signed and dated AH 1517. Another charming border by Ambrosius Holbein embellishes the beginning of the commentary while the woodcut border on Erasmus's epistle to the reader is attributed to Master HF (Hieronymus 1983, no. 302).

Manuscript annotations: The present copy contains manuscript marginalia derived from Sebastian Münster (1488-1552), the celebrated humanist, cosmographer and Hebrew scholar, especially from his Hebrew edition of the Gospel of Matthew. The volume recalls the importance of Hebrew studies among Renaissance humanists and serves as a fascinating reminder of the double role Hebrew played during the Protestant Reformation. Fervent Reformers examined Jewish texts both to equip themselves better in arguments with contemporary rabbis and to more clearly understand the original Hebrew texts that lay behind the Latin Vulgate defended so fiercely by 16th-century Catholics.
In a precise 16th-century humanist hand, an unidentified scholar painstakingly transcribed the Latin/Hebrew commentary from Münster's Evangelium secundum Mattheum in lingua hebraica, cum versione Latina atque succinctis annotationibus printed in Basel by Heinrich Petri in 1537, into this book. Word-for-word copying was not considered a rote or passive activity at that time: copying was a tool of scholarship and our anonymous 16th-century scholar formed part of this intellectual milieu. The scholar shows good abilities in Hebrew, fluidly reproducing difficult characters (but rarely quoting longer Hebrew passages in their entirety). The Gospel of Matthew was a natural point of focus for Christian Hebraists: early church authorities held that Matthew's Gospel had originally been composed in Hebrew rather than Greek. Humanists thus asserted that a proper re-examination of the text accounted for the peculiarities of the ancient Jewish language. Indeed at one point, as if to reconfirm to himself the importance of his labours, our unidentified annotator notes that even Erasmus defended the patristic opinion of Matthew's textual origin.

Provenance: 1. Coat of arms in the second woodcut border with three heraldic roses on red and white (silver) ground (unidentified). – 2. Inscriptions found in the margins of pages aa4 and 1-87 are attributed to the hand of Sebastian Münster (see old note on title-page) because of the entry on upper margin of p. 79: … Ego Sebastianus Munsterus … in Calendario meo Hebraico nonnihil quoque scripsi … While the commentary is indeed by Münster, it seems unlikely that Münster would have quoted his own text as literally in the margins of another book. Moreover, one of the few deviations from Münster's text in our inscription is the addition of his name to the word Ego. An explanation as this would be useless, if the copy had belonged to Münster himself (Burmeister 2014). – 3. Nuremberg, Georg Sella (or Sessel; 1508-1571), a Lutheran schoolmaster and theologian; manuscript acquisition notes on title, dated 2 June 1544. Sella was acquainted with Philipp Melanchthon, Hebraists as Bernhard Ziegler and Andreas Osiander, and with the mathematician Johannes Schöner. A passionate book collector, he regularly wrote acquisition notes in his books. While Burmeister assumes that Sella could have been the writer of the inscriptions in our copy, there are slight differences between the handwritings of ownership inscription and annotations. – 4. Another (later) inscription: Venditu A. Schwarzio 4 (?) [Pound].

7 day return guarantee, with full refund for up to 7 days after delivery if an item arrives misdescribed.
The seller will bear the shipping costs. The buyer bears the responsibility of paying local sales taxes and customs duties.

Seller rating:
This seller has earned a 5 of 5 Stars rating from Biblio customers.
Biblio.co.uk member since: 2019
Stalden
Ask Seller a Question

Dr. Jörn Günther's passion for medieval books and manuscripts predates the establishment of his art dealership in 1990. With a team of specialists at the helm, Dr. Jörn Günther Rare Books provides scholarly services, expert advice, long-term support on the development of collections, and the acquisition and sale of manuscripts, miniatures, and rare early printed books from the Middle Ages and the Renaissance.After a lifetime of bibliophile and 40 years of scholarly pursuit, Dr. Jörn Günther has earned a reputation as one of the world's foremost specialists and voices of authority in his field. He has been instrumental in the composition of some of the best collections worldwide, and has worked with leading international museums and institutions, such as New York's Metropolitan Museum of Art and the J. Paul Getty Museum in Los Angeles, and alongside private collectors on a quest to create and develop their own collections.

spine
The outer portion of a book which covers the actual binding. The spine usually faces outward when a book is placed on a shelf....[more]
New
A new book is a book previously not circulated to a buyer. Although a new book is typically free of any faults or defects,...[more]
device
Especially for older books, a printer's device refers to an identifying mark, also sometimes called a printer's mark, on the...[more]
First Edition
In book collecting, the first edition is the earliest published form of a book. A book may have more than one first edition in...[more]
title page
A page at the front of a book which may contain the title of the book, any subtitles, the authors, contributors, editors, the...[more]
marginalia
Marginalia, in brief, are notes written in the margins, or beside the text of a book by a previous owner.  This is very...[more]
fine
A book in fine condition exhibits no flaws. A fine condition book closely approaches As New condition, but may lack the...[more]
leaves
Very generally, "leaves" refers to the pages of a book, as in the common phrase, "loose-leaf pages." A leaf is a single sheet...[more]
vellum
Vellum is a sheet of specialty prepared skin of lamb, calf, or goat kid used for binding a book or for printing and writing. ...[more]

George Psalmanazar played a grand prank in 1703, pretending to be a resident of the island of Formosa. His book took London by storm.  Learn more...