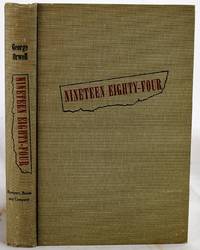 Harcourt, Brace and Company, 1949-01-01. Hardcover. Very Good. Signed. [Supreme Court Chief Justice Warren Burger's Copy, signed by him and with his embossed book plate]. Later printing. 314 pp. Hardcover, no dust jacket. Good binding and cover. Minor stain to bottom page end. Clean, unmarked pages. <br> Warren Earl Burger was the 15th Chief Justice of the United States, serving from 1969 to 1986. In 1969, President Richard Nixon nominated Burger to succeed Chief Justice Earl Warren. Initially he was not a strong intellectual force on the court, but sought to improve the administration of the federal judiciary. In 1974, Burger wrote for a unanimous court in United States v. Nixon, which rejected Nixon's invocation of executive privilege in the wake of the Watergate scandal. The ruling played a major role in Nixon's resignation. Burger joined the majority in Roe v. Wade in holding that the right to privacy prohibited states from banning abortions. He later abandoned Roe v. Wade in Thornburgh v. American College of Obstetricians and Gynecologists. His majority opinion in INS v. Chadha struck down the legislative veto.The Burger Court delivered numerous conservative decisions, it also delivered some liberal decisions regarding abortion, capital punishment, religious establishment, and school desegregation.

Nineteen Eighty-Four (1984) by George Orwell has become the definitive dystopian novel of the twentieth century. Originally published on June 8, 1949 by Secker and Warburg in the United Kingdom, the book follows the main character, Winston Smith, through his disillusionment with totalitarianism and a doomed struggle of resistance. George Orwell is a pen-name, Orwell's real name was Eric Blair. -

Customers may return ordered books for any reason within 14 days of receipt. We will pay the return shipping costs if the return is a result of our error. Shipping fees and handling fees may be charged to the customer if the return is the result of customer error. Open box charges may be applied for new books that are opened by customers (i.e. the shrink wrap is removed or there is obvious signs of wear.)

Seller rating:
This seller has earned a 5 of 5 Stars rating from Biblio customers.
Biblio.co.uk member since: 2008
Boonsboro, Maryland
Ask Seller a Question

Sequitur Books is an independent academic bookstore. We pride ourselves on a thought provoking selection, with extensive collections in philosophy, history, social science, African studies, Near Eastern studies, and physical science. Our motto, "For every person, a good book!"

jacket
Sometimes used as another term for dust jacket, a protective and often decorative wrapper, usually made of paper which wraps...[more]

Books transmit cultural values and can shape the views of society. Learn more about the history of American literature in Collecting Children’s Literature by Writers and Educators of the Harlem Renaissance.