Rare books Americana More Rare Books from Roger Middleton NAVIGATION and COMMERCE, their ORIGINAL and PROGRESS. Containing a succinct account of traffick in general; its… 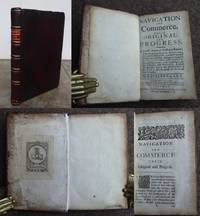 NAVIGATION and COMMERCE, their ORIGINAL and PROGRESS. Containing a succinct account of traffick in general; its benefits and improvements: of discoveries, wars and conflicts at sea, from the original of navigation to this day;

NAVIGATION and COMMERCE, their ORIGINAL and PROGRESS. Containing a succinct account of traffick in general; its benefits and improvements: of discoveries, wars and conflicts at sea, from the original of navigation to this day;

by EVELYN, John. From the Robert Pirie Collection.:

London, printed by T[homas] R[oycroft] for Benj. Tooke, at the sign of the Ship in St. Pauls Churchyard,1674.. with special regard to the English nation; their several voyages and expeditions, to the beginning of our late differences with Holland; in which His Majesties title to the dominion of the sea is asserted, against the novel, and later pretenders. By J. Evelyn Esq; S.R.S. FIRST EDITION 1674. Small 8vo, approximately 185 x 115 mmm, 6¾ x 4¼ inches, woodcut headpiece and initial, pages: [8] including initial blank, 1-120, followed by Table [14] plus 2 pages of adverts, collation A1-K4, A1 is first blank, K3 Errata on recto verso blank, K4 advert leaf, Robert S. Pirie's bookplate to first pastedown, plus an old ink name (George Spens) dated September 15th 1684 on the lower board. Bound in full contemporary leather with modern reback, gilt lettered title label, gilt rules and date to spine. Slight damage repaired to top corner of upper cover, top corner of lower cover worn with tip missing, pale browning at edges of endpapers and all pages throughout, first free endpaper has neat small repair to lower edge, pages 69-96 with worming to lower margins varying in size, 18 pages with slightly larger tracks all neatly repaired, not affecting text or any loss to text (see attached image), a few words have small old ink corrections, maybe in Evelyn's hand or printer's hand, as I have examined another copy with identical corrections. Corrections to 4 words and 3 letters, and underlining in 10 places, some being very small. Originally written as the introduction to Evelyn's History of the Battle for Sovereignty over the Seas between England and Holland, which he had been commissioned to write by Charles II. By the time it was published peace had been negotiated with Holland and the work gave such offence to the Dutch that the ambassador demanded its suppression. The rest of the work was given to Samuel Pepys in 1681 for his proposed history of the Navy. See: Sotheby's, Collection of Robert S. Pirie, 2015, Lot 356 (catalogue still on line by Google); Sotheby's, The Library of the Earls of Macclesfield, Part eight, page 131, No. 2654; Geoffrey Keynes, John Evelyn, A Study in Bibliophily, pages 201-206, No. 92; Christies catalogue 1974, A Selection from The Scott Library of Navigation and Marine Science, page 61; Catalogue of the Goldsmiths' Library of Economic Literature, Volume 1, page 124, No. 2078; The Kress Library of Business and Economics, Volume 1, page 76, No.1358; Joseph Sabin, A Dictionary of Books Relating to America, 23208; ESTC R8611. MORE IMAGES ATTACHED TO THIS LISTING, ALL ZOOMABLE just click in the image, FURTHER IMAGES ON REQUEST. POSTAGE AT COST.

We have been established booksellers for 42 years. We are a postal business only (strictly no callers). We are long-standing members of the P.B.F.A. the largest trade association for antiquarian booksellers in the UK. We wrap all our parcels in new materials and all our books are insured at our expense. Books may be returned if wrongly described, all costs will be met by us. ****PLEASE NOTE: POSTAGE WILL BE CHARGED AT COST, MEANING THAT POSTAGE WILL BE REDUCED ON PARCELS WEIGHING UNDER 1 KILO, AND IT WILL BE INCREASED ON MOST PARCELS WEIGHING MORE THAN 1 KILO****

Seller rating:
This seller has earned a 5 of 5 Stars rating from Biblio customers.
Biblio.co.uk member since: 2010
Oxford, Oxfordshire
Ask Seller a Question

We are a postal business only, selling rare and antiquarian books on interesting subjects.

edges
The collective of the top, fore and bottom edges of the text block of the book, being that part of the edges of the pages of a...[more]
spine
The outer portion of a book which covers the actual binding. The spine usually faces outward when a book is placed on a shelf....[more]
recto
The page on the right side of a book, with the term Verso used to describe the page on the left side.
bookplate
Highly sought after by some collectors, a book plate is an inscribed or decorative device that identifies the owner, or former...[more]
errata
Errata: aka Errata Slip A piece of paper either laid in to the book correcting errors found in the printed text after being...[more]
gilt
The decorative application of gold or gold coloring to a portion of a book on the spine, edges of the text block, or an inlay in...[more]
verso
The page bound on the left side of a book, opposite to the recto page.
First Edition
In book collecting, the first edition is the earliest published form of a book. A book may have more than one first edition in...[more]