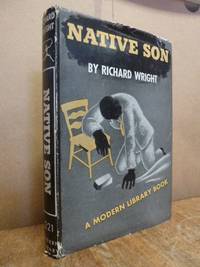 Richard Wright’s Native Son tells the story of 20-year-old Bigger Thomas, a black American youth living in utter poverty in Chicago's South Side during the 1930s. When Bigger unintentionally murders a white woman, he is put on trial and eventually convicted, and sentenced to the electric chair. Often recognized as a protest novel, Native Son stresses systemic racial issues, prompting the reader to feel both sympathy and empathy for Bigger. In this, the novel is one of the earliest successful attempts to explain the racial divide in America in terms of the conditions imposed on African-Americans by the dominant white society. Soon after publication, Native Son was selected by the Book of the Month Club as its first book by an African-American author. Indeed, the novel was an immediate best seller, selling 250,000 hardcover copies within three weeks of its publication. As a result of the novel’s success, Wright became the first bestselling and the wealthiest black writer of his time, establishing him as a spokesperson for African-American issues and, to many, the “father of Black American literature.” In 1941, the National Association for the Advancement of Colored People awarded Wright awarded the prestigious Spingarn Medal. Unsurprisingly, Native Son was challenged in many public schools and libraries and is listed in the American Library Association's list of the “Most Frequently Challenged Books of 1990–1999.” Yet most institutions in which the novel was challenged successfully fought to keep Wright's work accessible, particularly in the classroom, defending it as a guide into the reality of the complex adult and social world.   Native son is listed as 20th on the Modern Library’s list of the “100 Best” English-language novels of the 20th century. It is also included in TIME’s “100 Best Novels” (since 1923).

With any further question please contact: Ines Streu or Thomas Orban. Mail to info@orbanundstreu.de or call 0049 69 94415570

Seller rating:
This seller has earned a 5 of 5 Stars rating from Biblio customers.
Biblio.co.uk member since: 2008
Frankfurt am Main
Ask Seller a Question

As we also have a brick-and-mortar store, we would be pleased to welcome you there personally. Visit us in the centre of Frankfurt am Main in Germany. We sell books and records with emphasis - for 20 years. Of course we are happy to give you further information in English and pictures for every single item.